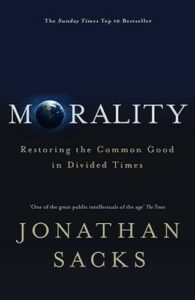 ‘A free society is a moral achievement.’ Liberal democracy is in danger because collectively we have forgotten, ignored or denied the moral component of our freedom. Markets and democratic politics are not sufficient to sustain society – morality is needed that has concern for the other and an active commitment to justice and compassion. “It is about ‘Us’ not ‘Me; about ‘We, not ‘I’.”

Jonathan Sacks, the well known former Chief Rabbi of Great Britain, who died in late 2020 has written his last book almost as a lament for what has been lost from the societies of Europe and the USA. We are moving from a sense of society to instead having identity groups as politics fragment. Despite our increased living standards, we are less happy, economic inequalities are rising and there is a dangerous clamp down on freedom of speech particularly in Universities, often in the name of harm reduction. We are suffering what he describes as a ‘cultural climate change’.

Sacks went to university originally to study economics but switched to moral philosophy. He has been a prodigious writer throughout his career as Chief Rabbi and in retirement, often drawing on his moral philosophy, and this book is no exception. Morality for Sacks is the ability to get on with one another as we share the “same framework of virtues and values, rules and responsibilities, codes and customs, conventions and constraints.” It is a plea to move back from ‘I’ to ‘We’. The context of Sacks as a person and writer is his orthodox Judaism, which has a huge respect for such a shared idea of morality and collective social order.

There are some insightful stories, such as that of Dr Guttmann, who escaped from Nazi Germany. He was asked to lead the first ever centre for paraplegics at Stoke Mandeville Hospital. Most were young men injured in the war. The then treatment was strong pain relief until they died. Dr Guttmann saw them as people with a future and fought against the established view that active rehabilitation was impossible. From that insight grew what became the Paralympic games. Dr Guttmann, treated as sub-human by the Nazis, looked outwards and lived his life with a purpose to help others.

Sacks moves from the solitary-self to examine the consequences of markets without morals, the danger for democracy and identity politics. The point is repeatedly made that we are social beings who thrive in networks of relationships; community is essential to identity. If we lose the national sense of shared values and the institutions of civic society then our liberal democracy is in danger. The rise of identity politics is a clear sign of the breakdown of national identities and institutions, argues Sacks.

The power of social media to spread false stories is demonstrated by Lord Sacks having to do a lecture tour around America to dispel the false story that the Holocaust was no longer being taught in British schools. The use of the internet to bring the private into the public and the return of shaming is charted as the route to the death of civility. Yet all is not lost. Morality is essential to our dignity, our happiness, meaning and ‘structures of grace that constitute a good society’. Lord Sacks concludes with the hope that, as in the past, where we recovered a sense of morality that we can do so again. He argues for ‘covenantal politics’ which is about the ‘We’. ‘Societies become strong when they care for the weak…they become invulnerable when they care for the vulnerable.’ The change ‘begins with us.’

The analysis of our situation is penetrating, although it will not be shared by all. There is a strong sense of loss and some hope. I wonder whether Lord Sacks is grasping for what has long gone and that was not always as ideal as might appear. No longer can we have a uniform view of morality in a world where cultures and peoples mix to become much more plural. Yet if Covid-19 teaches us anything it is that, in a crisis, many are prepared to move from ‘I’ to ‘We’, as we share in the threat to our common humanity.