Find out more about the Exeter Cultural Partnership

In 2016 a historic quarry re-opened, thanks to the cooperation of Devon County Council and the owner of the Dunscombe Manor Caravan Park.

Materials were last extracted from the Dunscombe Manor site in the 1980s but recent acceleration of the major works programme has depleted the Cathedral’s stockpile of Salcombe stone which is used to replace original, decayed material on a like for like basis.  This type of work is essential as the Cathedral commences the latest phase of its restoration, due to last until at least 2026. 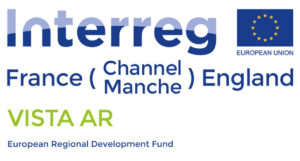 The University of Exeter is leading the Interreg France (Channel) England project Vista AR which will develop and implement a range of exciting augmented reality (AR) and virtual reality (VR) experiences for a number of tourist attractions in the South of England and the North of France.

The project will work closely with Exeter Cathedral and Fougères castle in France, to develop an understanding of visitor experiences, create new VR and AR digital tools, and explore new business models and opportunities presented by digital technology.

VISTA AR will explore the use of different digital devices to create new visitor experiences. Virtual reality helmets, tablet and smartphone devices, and immersive room experiences will be used to bring history to life, allowing visitors to meet characters from the past and providing access to inaccessible heritage artefacts.

Once developed the digital tools will be used to create new digital experiences in a further four locations; the National Trust Tin Coast, and South West Coastal Path in the UK, as well as the Lorient Submarine Museum and the Gardens of Valloires in France.

The tools developed by the project will be made available to other UK and French cultural heritage sites on a cloud-based system where they can be easily accessed and adapted to the needs of each specific heritage location.

The project is a major step in providing cultural heritage sites with an effective way to enhance visitor experiences while increasing visitor numbers and revenue.

The aim of the project is to make AR/VR available for a lesser cost to more heritage sites to help them increase the number of visitors by tailoring their digitalisation to their business models.

Historic attractions in Britain and France (including Exeter Cathedral) are set to be transformed as experts work to use virtual reality and digital technology to revolutionise the way visitors experience the historic locations. Historians, a...

Digital transformation for Exeter Cathedral
In this section
Donate now

With no regular government or church funding, your donations really count.

See how you can help
Book tickets

A range of fantastic events for all ages

Gifts and souvenirs from our own Cathedral Shop.