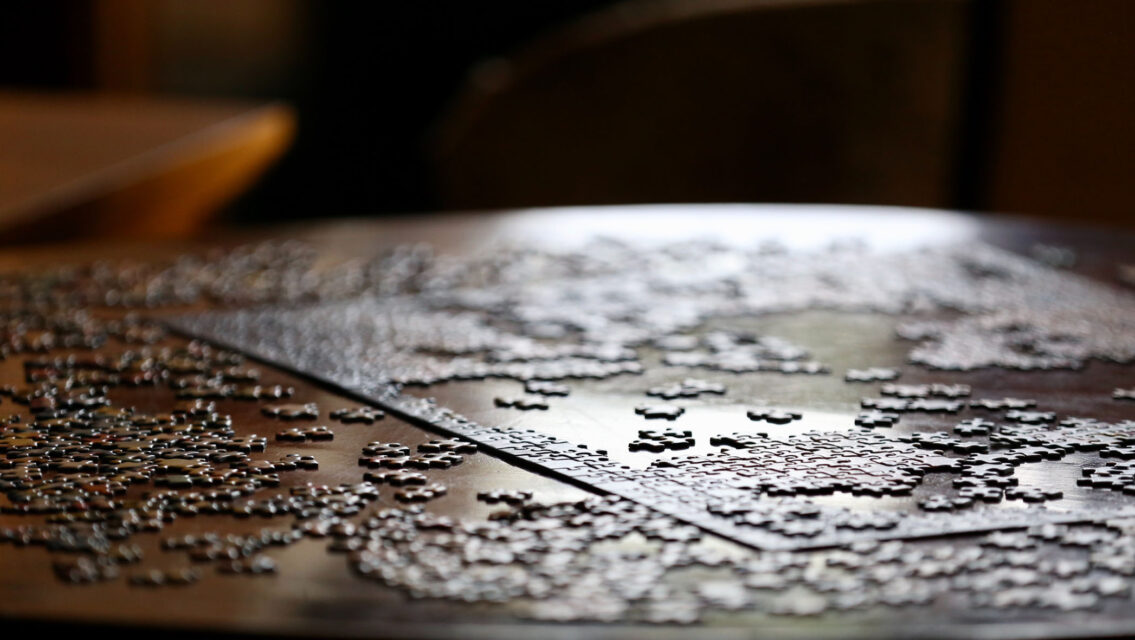 By The Revd Preb Julian Ould

This Christmas has been strange in so many ways. For me personally, I have enjoyed my first Christmas off in thirty-seven years. It was a joy to attend the Eucharist at the Cathedral and then return home to the more secular celebrations. However, it was also strange in that Jane and I were on our own. Normally we would have Jane’s sister with us, she living on her own, and with two daughters close at hand and grandchildren as well, our house would be a riot of excitement and activity and whilst I missed them all, it was really rather nice just to have a quiet day to enjoy and relax. But! I like to be doing something, so in advance of the festivities I ordered and received a thousand-piece jigsaw. The picture was a sky full of hot air balloons and most assuredly presented a challenge, but with a quiet few days before me, it was ideal.

I haven’t done a jigsaw in years and think I was in my teens and on holiday with my family the last time I attempted one, there never being time since to contemplate such a venture. Now was the time to address this and so on Christmas Eve I emptied the box of its contents and started to lay the pieces out and over the course of the next seven days I dipped in and out of staring at the pieces and gradually completing the task. The balloons were difficult enough, but I separated out all the blue pieces at the outset and eventually had the balloons in place. The real challenge was the sky, but as I struggled, I noticed on the back of the pieces were a pattern of letters which enabled me to at least see which way up the pieces went. This made a great difference and so I completed my task and felt quite pleased with myself.

So, why am I telling you this? It was certainly a time waster, but nevertheless something I enjoyed and in fact felt I had achieved something. However, as I worked and particularly when I found the letters on the back of the pieces, I remembered a story about a family who were obsessed with jigsaws and were ever looking for more difficult challenges to tackle. Whilst musing one afternoon in his office about where to find the next puzzle, the father looked across to the far wall where there was a very large map of the world. The more he looked at it, the more he saw this as the next challenge. Very carefully he took the map down, which was mounted on card, and painstakingly set about the task of cutting it into small pieces. With all the vast areas of single colours, this was going to take the family an age to complete this; the ideal challenge.

The father presented his children with a bag of pieces, claiming: ‘this one might just beat you’. To his surprise, half an our later and the children called him in to see the completed puzzle. He was flabbergasted and asked how on earth they had managed it. ‘Well,’ said the youngest daughter, ‘we discovered on the back of the pieces was a picture of a man. All we had to do was put the man together and the world fell into place.’ The man was a picture of Jesus!

In our fragmented world of today it would seem we face a puzzle of immense magnitude. However, if we look to the wonder of God made man and let ourselves be drawn to live his way of love, then like the children’s jigsaw, the world will and does fall into place.

May this year bring renewed hope as we celebrate the recognition at this Epiphany time, that Jesus came as the Saviour for the whole world and so go forward in faith.