Exeter Cathedral’s heritage is recognised by statute as one of the handful of English cathedrals of the Old Foundation. It is the English Decorated cathedral par excellence. Although many great building campaigns were carried out in this celebrated style, Exeter alone shows what an entire Decorated church of the first rank was meant to look like.

Exeter Cathedral is one of a small group of West Country building projects commissioned in the very forefront of European fashion, in which some of the key developments of late medieval architecture in England and continental Europe were first employed.

In making a judgement about the significance and quality of the Cathedral, we may turn to the assessment of Sir Nicholas Pevsner, perhaps the greatest 20th-century architectural historian in Europe, and his collaborator, Bridget Cherry. They admired, for example, 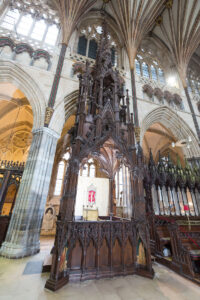 The bishop’s throne, ‘the most exquisite piece of woodwork for its date in England and perhaps in Europe.’

Fresh scholarship over the last generation has enhanced the reputation of the Cathedral, and emphasised especially the contribution of Thomas of Witney, its most celebrated master. The architectural historian Richard Morris has described Witney’s Nave as ‘one of the finest interior spaces which has come down to us from the later Middle Ages’, its windows as works of ‘dazzling virtuosity’ and ‘cosmopolitan modernity’.

Scholarship relating to the west front has brought out the sublime quality of its finest figures with their dynamic poses and magnificent draperies. Moreover, the preservation of the finest collection of documentation relating to a major medieval building of its period, alongside the excellent preservation of the church itself, ensures that Exeter will always have a prominent place in an overall understanding of the creation of gothic architecture in northern Europe. 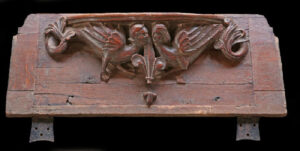 We have learned from Hugh Harrison, the international medieval timber specialist conservator, that of our 50 medieval misericords: 48 date from the period c. 1255–75, and 2 others from the C14th. There are only two complete series of misericords surviving in England from the period before 1290: at the cathedrals of Salisbury and Exeter. The Exeter misericords display a mix of foliate and figural subjects. The inclusion of the Exeter elephant suggests a date after 1255, reflecting the donation of an elephant to Henry III by King Louis IX of France in that year: the first occasion an elephant was seen north of the Alps since the Roman period.  The Exeter misericords are richer in interest than those of Salisbury, because their subject matter touches on many aspects of medieval thought and life. 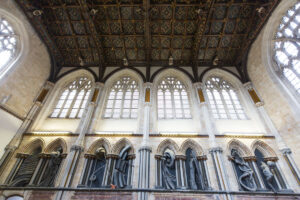 Tobit Curteis, Advisor on wall paintings for the National Trust, writes: “It is thought that the original Chapter House was constructed during the tenure of Dean Serlo d.1230 and so the main arcades date to this period. The paintings in the niches behind the panelling, although damaged, are of considerable significance providing insight into some of the earliest decorative schemes of the Cathedral and chapter house. The painting is elaborate and well executed demonstrating the importance and sophistication of the building at the period. Further study needs to be undertaken into comparative examples, but it appears likely that, if painting is present in most or all of the niches, the scheme will be among the most comprehensive of the period to have survived.” 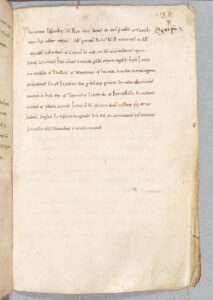 The Exon Domesday is the only surviving manuscript from the phase of the Domesday Inquest (1085) which immediately preceded the creation of Great Domesday Book. The page shown here is about Exeter, ‘Excester.’

The Cathedral has a modern library and archive facility in which are preserved many thousands of books and documents, which span the 10th – 21st centuries.

The Library contains medieval manuscripts, early printed books and modern published texts on a remarkable range of subjects including local history, theology, medicine, science and many more.  The best known volume is the Exeter Book, an anthology of Anglo-Saxon poetry from the 10th century, and recognised by UNESCO, who have placed it on their Memory of the World Register, as the foundation volume of English literature.  We also have Exon Domesday, the only surviving manuscript from the phase of the Domesday Inquest (1085) which immediately preceded the creation of Great Domesday Book.  Our archives contain a vast collection of records documenting the history of the Cathedral, including the Foundation Charter from Edward the Confessor in 1050, and the most comprehensive collection of Fabric Rolls recording its construction of any English medieval building.  These Fabric Rolls have been widely used to uncover and tell the human story behind the every day lives of the people who rebuilt the cathedral in the Middle Ages.

We are proud of our Accredited Archive Status, which recognises our high quality care and management of the collection, but we have really inadequate exhibition space and interpretation, in order to give proper access to this remarkable collection.    We are particularly keen to open up the Library and Archives to people across Devon, to engage them with and inform them about their heritage, and build their confidence and pride in their rich history.

Dr Norman James, former Principal of the Archives Advisory Service, writes: “The archives and manuscript books and the bulk of the printed collections when taken together are of major national importance. Two items, the Exeter Book and the Exon Domesday, are iconic items of fundamental importance to British history and culture.”

The Cathedral is one of the key partners in the UNESCO City of Literature. This project alongside the literature activity programme will create an even greater draw for visitors from all over the UK.