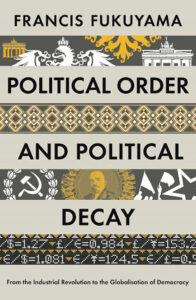 If we want to understand the political systems that dominate our world then we need to delve into the historical events that shaped them. Beginning with the Industrial Revolution Fukuyama explains how the state, law and democracy developed and the tensions between liberal and autocratic government emerged.

Fukuyama, a world renown political philosopher and writer from Stanford, has written two volumes covering ‘The Origins of Political Order’, and this book that takes us from when the world changed economically in 1800 with growing incomes, the expanding division of labour, property rights, double entry bookkeeping and the rise of modern states and corporations, right up to the first decade of this century. It is a door stopper at over six hundred pages of well researched history and analysis.

The evolution of political order is made up of three parts – the state, the rule of law and accountability. Participation in democratic elections is the main form of accountability that has developed. Such development varied country by country depending on a number of factors such as social mobilisation, trust, economic growth and the emergence of ideas such as liberalism. Countries such as Italy, where the political instability of today can be explained by a history of low trust and clientelistic mindset, which does not separate public and private interest. Britain and Germany have very different histories where public bureaucracies where established based on merit rather than jobs for votes. The state became effective and trusted. The rule of law became independent of politics and the franchise of voters expanded beyond the landed aristocracy thanks to the emergence of a middle class demanding more say in the political process.

The experience of the USA is different again with a history of distrust in government that led the founding fathers to create a series of check and balances. The role of the courts in America is much more important than we find in other modern liberal democracies. Laws passed by Congress tend to be a series of compromises creating over complicated legislation that judges have to sort out. Many other countries are considered from Asia, China, Africa and the failure of the Arab Spring is clearly explained through the historical influences. Democracies do not appear overnight. Many are the result of decades of struggle, some of which are violent, the UK being but one example.

Political order is not something we can take for granted. An important idea put forward is how democracies can decay. Populist leaders are a threat. Most decay occurs from within. Never forget that Hitler won power through a democratic route. It is those leaders who then hollow out the state institutions that create the conditions for decay. Fukuyama provides some interesting detail on the situation in America where government is becoming less effective as the autonomy of bureaucracies are constantly undermined. We are in a democratic recession with the rise of autocratic and populist leaders in a number of countries including in Europe. Political order needs the balance of a state that respects and upholds the law and is held to account by those it seeks to serve.

If you are in need of a long and serious read – then this book is for you. You will find a huge amount to interest you if you wish to understand our modern political systems, thanks to the excellence of the research and skill of the writer.