Advent Lyrics from the Exeter Book 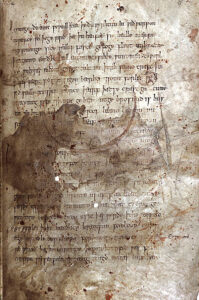 The Exeter Book – the great and unique collection of Anglo Saxon poetry which has been at Exeter Cathedral for nearly 950 years – begins with a section of poems known as The Advent Lyrics.

The Advent Lyrics explore the themes of Christ’s coming to redeem humankind and the Virgin Birth and are inspired by the O Antiphons from vespers in the season of Advent. They have a reputation as being among the very finest of the surviving Anglo Saxon poems, beautiful and rich with imagery.

Lyric 1 is inspired by the O Antiphon for December 22:

“O King of the people and their hearts’ desire; O Cornerstone, who make both things one: come and save humanity whom you have fashioned from clay”

Lyric 1 is the first surviving poem in the Exeter Book, taking up the first 11 lines of the page. The beginning of the poem is missing, and parts of the rest are hidden by a stain left behind centuries ago by a glue pot, but this is what it says:

The poem is written in Old English, so unfamiliar to most of us. But, look carefully and you may be able to see some words which aren’t so different after all: Cyninge = King; weallas = wall; Þæt = that; healle = hall; flint = flint/rock; sylfa = self; hus = house; hrofe = roof.