Can Patience Liberate Us? 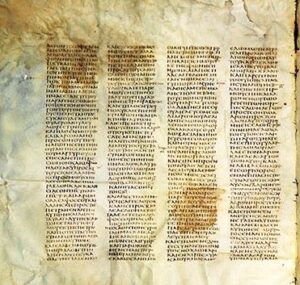 Some years ago, the British Museum held an exhibition called Egypt: Faith after the Pharaohs. The museum’s curators brought together around 200 objects showing how Christian, Islamic and Jewish communities have interacted with one another over many centuries. It was a fascinating exhibition. What excited some visitors was the opportunity to see the Codex Sinaiticus (the Sinai Book).

This book contains the earliest complete copy of the New Testament. It was handwritten in Greek in the mid-fourth century. Imagine for a moment the work, devotion, and patience involved in creating it. It’s so precious that it has only been on public display twice. Seeing it is, almost, to look directly into the past.

If you were to see this ancient artefact, you would notice at once that there are a few fundamental differences from what we’d expect to see in a modern Bible. For one thing, the Codex Sinaiticus isn’t divided into chapters or verses. There aren’t any page numbers either. These were added by translators and printers much later to help organize and divide the Bible into the logical sections that we now take for granted.

As the Codex Sinaiticus shows, language and how we communicate evolves. The ancient and modern conventions surrounding the written word that we have grown up with are both liberating and constraining. Without order, without structure, words by themselves would simply be meaningless to us. Yet if we remain unaware of the conventions within which we communicate, then the conventions may not change for the better and our ways of relating do not evolve and improve.

The British Museum, along with all other museums, art galleries, cinemas, and many other different kinds of entertainment and cultural centres, reopened this week after being closed to visitors for many months. Each inviting us to go to a play, watch a film, take in an exhibition or attend a sports event. We are deeply fortunate to be surrounded by so many opportunities to experience things which can bring us joy.

Many people will have drawn up a list of ‘must see’ or ‘must do’ experiences which they hope to tick off in the months ahead. There’s a longing for action. Yet one inescapable aspect of our common experience over last year has been a need for us to grow in patience.

Being patient means to wait, or to continue doing something, without complaining about the difficulties on the way. On the surface it may appear to others as though nothing much is happening. Patience may be characterised, outwardly, by calmness or stillness (the absence of action). Yet, at the same time, unnoticed by others and ourselves, there may be something far more profound taking place. The personal conventions within which we have chosen to live may be being changed. And this may lead to a reconsideration of our desires, our longings, our priorities, as well as the ways in which we relate to one another and the world around us. Patience may liberate us from our self-imposed constraints and so allow us to live more of the life that God, the author of all life, longs for everyone to live.