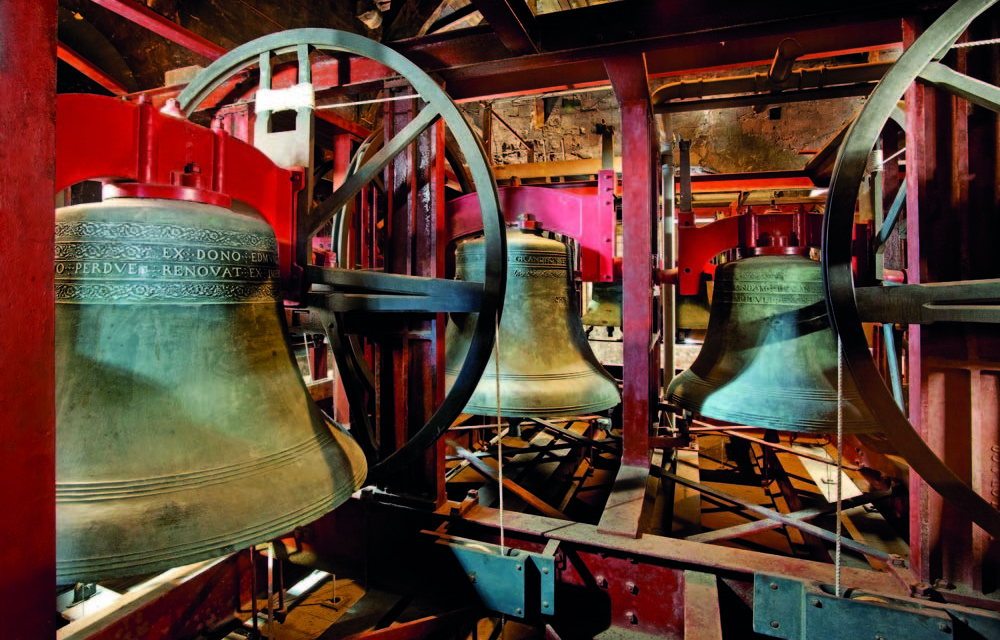 The sound of bells will fill the air in Exeter on 22 June, as ten of the best bell ringing teams in the country descend on the city’s Cathedral for the final of a national competition.

It is the first time in a quarter of a century that the National 12 bell striking contest has been hosted by Exeter Cathedral. Exeter’s bells are considered to be among the finest in the country; a heavy ring of twelve with the tenor bell, Grandisson, weighing 72 cwt. They are the second heaviest peal in the world, after Liverpool Cathedral, and have a reputation for being a challenge for even the most experienced of bell ringers.

Ten teams, each consisting of twelve ringers, will each perform the same ‘test’ piece of bell ringing as they ring the method known as Stedman Cinques. This is regarded as the most musical of bellringing methods, as the bells swap over in repeated pairs again and again, with the heavy tenor bell beating time for the other bells to follow. The ringing is expected to last around five hours.

Competing teams include ringers from St Paul’s Cathedral, Birmingham –the current holders of the trophy –  Bristol and Cambridge, with a home team from Exeter Cathedral. Judges will mark each team for their accuracy in striking each note of the bells in a perfect rhythm.

Inside the Cathedral, visitors will be able learn about the history of the bells and have a go at ringing themselves, while also watching competitors ring the bells via television screens set up in the Nave. Meanwhile, competing ringers and friends will also be able to meet each other and enjoy the sound of bells in the neighbouring Palace Gardens, by kind permission of the Bishop of Exeter.

Clare Griffiths, secretary to the Exeter Cathedral Bellringers, said: “Here at Exeter Cathedral we are all looking forward to welcoming our visitors for a day that is a real highlight in the ringing calendar. This event has been over a year in the planning, and the support from ringers across the southwest has been incredible, with around 130 volunteers helping us to stage the final.

“The competing teams have also been practising hard, as winning the competition is a huge accolade for any tower, as well as an honour for us to host.”

The Dean of Exeter, the Very Rev Jonathan Greener, said: “We are delighted to welcome back finalists in this prestigious competition to Exeter Cathedral, after 25 years. The Cathedral has some of the best bells of any Cathedral in the country, and they have been rung in times of national joy, and of sorrow, for centuries.

“The final promises to be a great day and I hope the sound of the bells will attract many people into the Cathedral to find out more about the art of bellringing, and take this special opportunity to try it for themselves.”