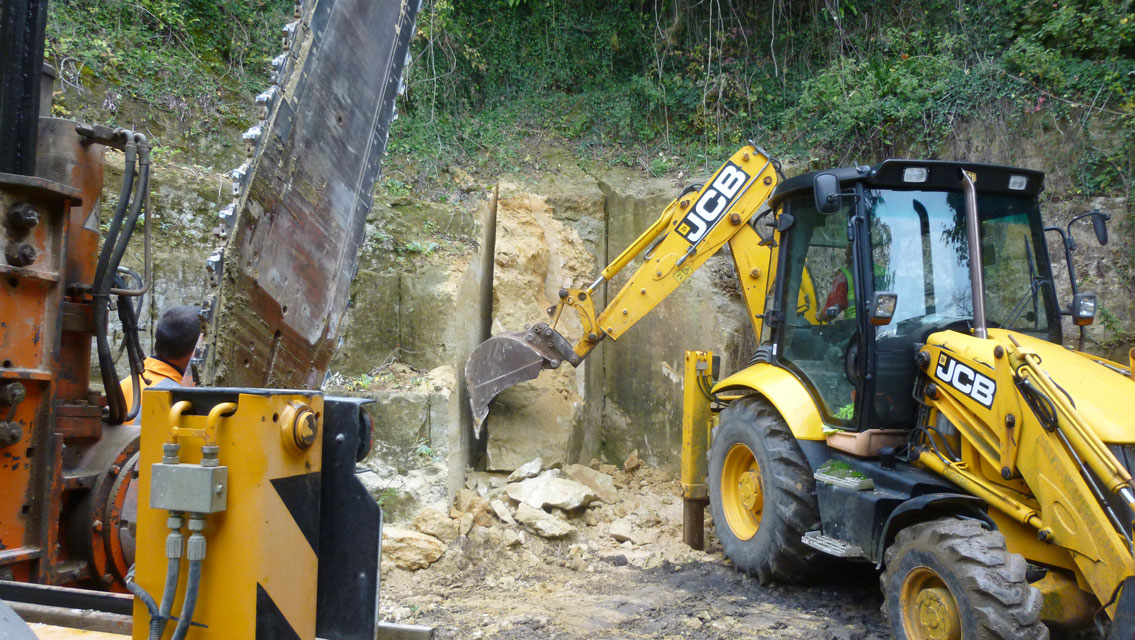 Stocks of the specialist “Salcombe” stone needed by stonemasons working on Exeter Cathedral have been given a welcome boost after the annual extraction from a medieval quarry.

This year’s work took place on Tuesday 20th October until the supervision of Chris Sampson (Clerk of Works at Exeter Cathedral), and Craig Morgan, who manages the site as part of the Dunscombe Manor Caravan Park near Sidmouth. The permitted quota of 5 cubic metres (which equates to approximately 14 tonnes) of stone each year allows the ongoing programme of repair work to the historic fabric of the building to continue, as Mr Sampson explained:

“We have a really clear idea of the types of stone used in each area of the Cathedral, and with that comes with an obligation to replace ‘like with like’ where possible.

“The Salcombe stone extracted today will allow us to achieve the closes match for the original building stones that we will replace over the coming year.”

A specialist chainsaw with tungsten carbide teeth was used by stone experts Ham and Doulting to slice vertical cuts into the whole quarry face, before being prized out by an excavator. The stones are then cut into blocks of approximately 2 tonnes so they can be lifted and transported away, and subsequenty sawn down into smaller individual blocks as required.

The site at Dunscombe Manor was one of several quarries along the coast near Salcombe Regis that once supplied stone for the construction of the Cathedral, including the Norman towers and the West Front. Materials were previously extracted there in the 1980s but the recent acceleration of the major works programme had depleted the Cathedral’s stockpile.