By The Ven David Gunn-Johnson

I am aware that Cathedral Life was intended to be of particular interest to those who may have little involvement with the daily life of the Cathedral but who nevertheless have a great interest in it and even an affection for it.

Sometimes the Church as a whole gives an impression of ‘us and them’; the religious (the ‘us’ crowd) and then the not so religious and the not at all religious. Well, as I understand it when Jesus lived among us he got on a lot better with the people in the last two categories than the first.

If by any chance you love the building but aren’t sure how you stand with what is done inside it, I have a story for you. And if I tell it right, the reason for me telling the tale will become clear. 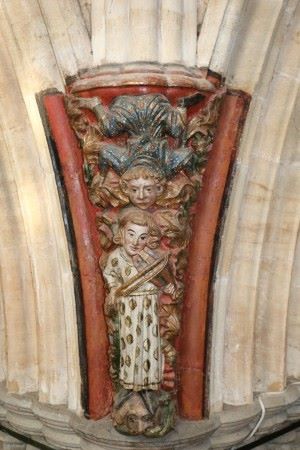 In the twilight years of ministry, laughingly called retirement, I have been afforded a place and a task in Exeter Cathedral. I gain so much from the from the building itself and from its artwork. My favourite image is on a pillar to the east of the pulpit on the north side of the Nave. It shows a tumbler and a viol player. Opposite is an image of Our Lady defaced possibly by Cromwell’s Levellers. Hundreds of people have made stories around those images. Here is just one.

There were two travelling entertainers, brother and sister, he an acrobat and she a musician, a viol player. They would play and tumble in the streets for pennies and, when they could get the work, they would entertain in fine houses at banquets. The tumbler was a pious soul with a special devotion to Our Lady and would miss no opportunity to pray before her image whenever he could. Often they were turned away from the churches, being suspected of vagrancy but his devotion grew ever stronger. His sister had no such faith. She saw the way of the world, the corruption of many clerics, the selfishness of the rich and all this stood between her and a God she could no longer believe in. She was, however, devoted to her brother.

One day she found the tumbler weeping at the door of a church. He had been shut out. However, outside, set in the wall, was a weather stained image of the Blessed Virgin. ‘Weep not’, the girl told her brother, ‘Look she is here. Do what you do best for her and I will play for you.’  So the one played and the other tumbled before the weathered image. A group of monks passed and were, most of them, outraged. They started to abuse the ragged pair until a ringing voice demanded. ‘Leave them. Be silent.’ It was the abbot. He asked what the pair were doing but the tumbler was afraid and could not speak. Not so the musician. She faced the abbot and said, ‘My brother is a good Christian and devoted to the Mother of God. I am not. He tumbled for her. I played for him.’

Such a speech might have cost her dearly but the abbot looked her straight in the  eye and said: ‘Then in her name and for my own sake, I accept and bless his offering and yours. Both are worthy. Come share our meal tonight.’

In this cathedral church, everyone – absolutely everyone – has place. There will be those who, like the tumbler, have a clear belief and who come here because the joy of worship lifts and holds them in their life of faith. And, skipping over all the degrees of faith, or lack of it, in between, there will be those who, rightly unashamed, come here simply for love of the place, its beauty and the stories it tells.

For so many the opportunity to link their love of beauty in art and architecture with their spiritual lives has been hindered by a Church which has failed to declare its faith in ways that would resonate; or worse, in the way in which it has focussed on itself rather than the needs of the world.

Well here at the Cathedral Church of St. Peter in Exeter, I make so bold as to speak with the voice of that long dead abbot and with him lament the ways in which the Church has failed those on the margins of faith.

If that is how you see yourself, and if you enter this place and are moved by the beauty and the spirit you find here, if the soaring arches lift your heart beyond the here and now then, if I understand anything of the heart of the One who is loved and worshipped here, I am bound to declare that here in this place you have your place; your presence itself a worthy offering. Even if that is not how you see it.

PrevPreviousEnjoy Free Entry to Exeter Cathedral on 13 and 14 August
NextRemembering Plymouth in our PrayersNext
© 2022 Exeter Cathedral. All Rights Reserved.
Safeguarding