The archaeologists currently digging at Exeter Cathedral aim to reveal crucial information about the layout of the site’s original medieval cloister. This information will be used to inform the design of a proposed new Cloister Gallery. However, on a site of major historical importance that has undergone multiple transformations throughout its 900 year history, the team hope to unearth other significant discoveries too. Archaeologist Simon Hughes keeps us updated on their progress:

Our investigations in the cathedral cloister have now finished but we had an exciting end to our excavation. In the final couple of day we focussed on looking at how deep the cloister footings were in order to provide information needed for the design for the proposed new covered link. For this we dug down alongside the 14th century wall and associated buttresses in two locations. These proved to be substantial, with the base of the buttresses extending to around 1.8m below current ground level. The medieval builders’ construction trench had been dug through a series of layers dating from throughout the history of Exeter, the earliest of which allowed a glimpse of Roman Exeter. We had already had a hint of what lay beneath the cathedral, from Roman pottery, roof tile and a coin found within later soils. However, in digging down in one location we exposed a small section of well-preserved metalled Roman street surface. Its position could correspond with one of the streets that would have subdivided the legionary fortress (c. AD55-75). In the other investigated location the medieval buttress had been built though a mortar floor surface. This was likely to date from the period following the military occupation when Exeter became a civil city and regional capital. Although only a small area was revealed, it would have formed an internal surface to a building, the remains of which almost certainly survive under our feet. 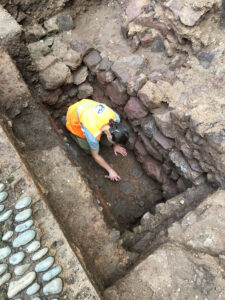 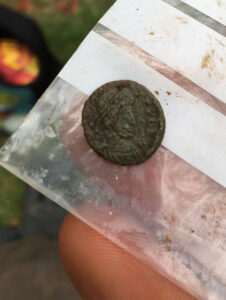 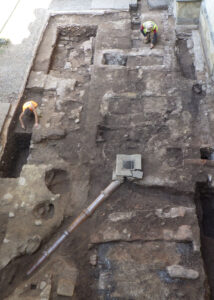 View of the site at the end of the investigations

We are now nearing the end of our excavation. Moving on from investigating the extent of the surviving cloister wall, we have uncovered what would have been within the cloister walk adjacent to the Chapter House. Here we have encountered a series of rectangular stone structures within the east walk. These have been identified as stone-lined graves, which would have been overlain by slabs likely to have been visible in the cloister walk floor. We don’t know who these individuals were but their position adjacent to the Chapter House door suggests that they would have been important members of the cathedral during the medieval period. Other than testing the depth of a couple of the graves, it is not our intention to expose the burials. However, our investigations suggest that many have been previously disturbed. Archaeologists are always looking for items to date what they are recording and there is little better than what we found in one of the disturbed graves: a Charles I farthing dating from 1630. This provides excellent evidence to suggest that many of the graves were disturbed as part of the Civil War period demolition of the cloister. 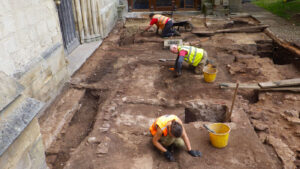 Investigating the graves within the cloister walk. Chapter House door to left 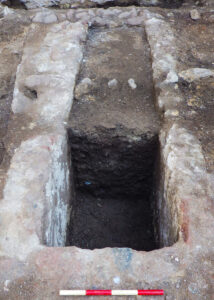 An example of one of the stone lined graves

Charles I coin found in one of the disturbed graves

The whole site is now taking shape. Since our last blog, we have been concentrating on the southern part of the site, which is adjacent to the Chapter House and Café. Here, we have exposed the entire extent of the former east walk cloister wall. The cloister was demolished just after the Civil War, in 1655-56. At this time the land was bought and the building material sold off. These documented events correspond with the archaeological remains. We have found that all of the above ground masonry has been removed as well as part of the below ground footings. Nevertheless enough remains to make sense of the original layout. This included a wall around 1m wide with substantial buttresses set approximately every 3m. Amongst the rubble that was left behind there are fragments of the fine stone vaulting that decorated the ceiling of the cloister walk, as well as many more pieces of decorated floor tile. This helps to give an impression of the appearance of the structure before its demolition. 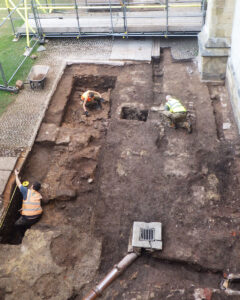 Aerial view of the investigations with the Chapter House to right 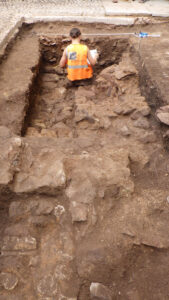 The remains of the cloister wall 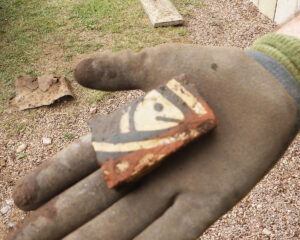 Now that the concrete has been removed things are really taking shape. In the area immediately adjacent to the ‘Bishop Brewer Doorway’ steps, which extend from the nave, we have picked up some fantastic elements of the former cloister. So far this has included exposing the remains of cloister walls that are thought to have lined the South Tower and the opposing nearest buttress. Between the walls, floor levelling with patches of mortar has been revealed in which the impressions of the settings of medieval floor tiles are clearly visible. Sadly these tiles were all removed for reuse as part of the 17th century demolition. Nevertheless, from the demolition debris we have picked of lots of decorated tile fragments, presumably ones that were broken during lifting. Clearing back is now underway in the area adjacent to the Chapter House and Café, where we hope to find the footings of the free standing wall of the former cloister east walk. 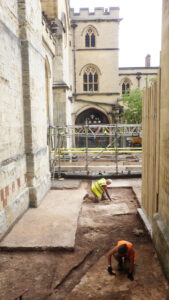 Looking south at excavations in progress 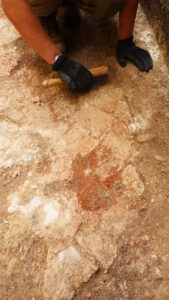 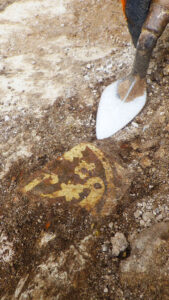 We have just completed our fifth day at of the East Cloister archaeological excavation. Unfortunately, you have to get the more boring jobs out the of the way first. The area we are investigating comprised a section of concrete paving bordered by concrete set cobbles. Having lifted and stacked the slabs and hammered out the cobbles we were disappointed to find yet more concrete! This turned out to be a 10cm thick slab. For this we had to admit defeat to and get in something with a bit more power. So today the slab was first sawn (apologies for the noise) and lifted using a mini digger. There is still more to come up but the areas we have had access to look promising with wall footings and surfaces already emerging. 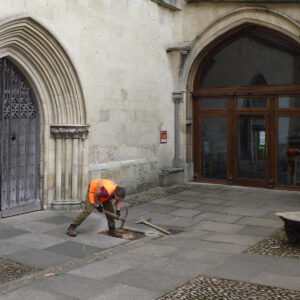 1. Libby getting things underway with the removal of the concrete slabs 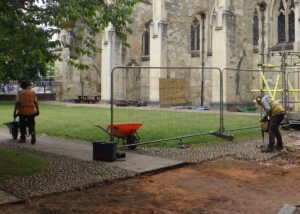 2. Hammering out of the concrete set cobbles 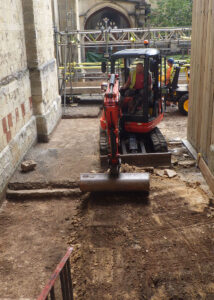 3. Machine assistance needed to get the concrete stripped off 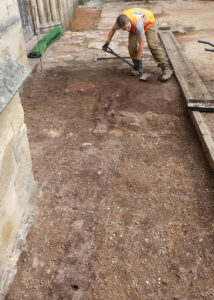 4. First exciting hint at what lies beneath the concrete slab