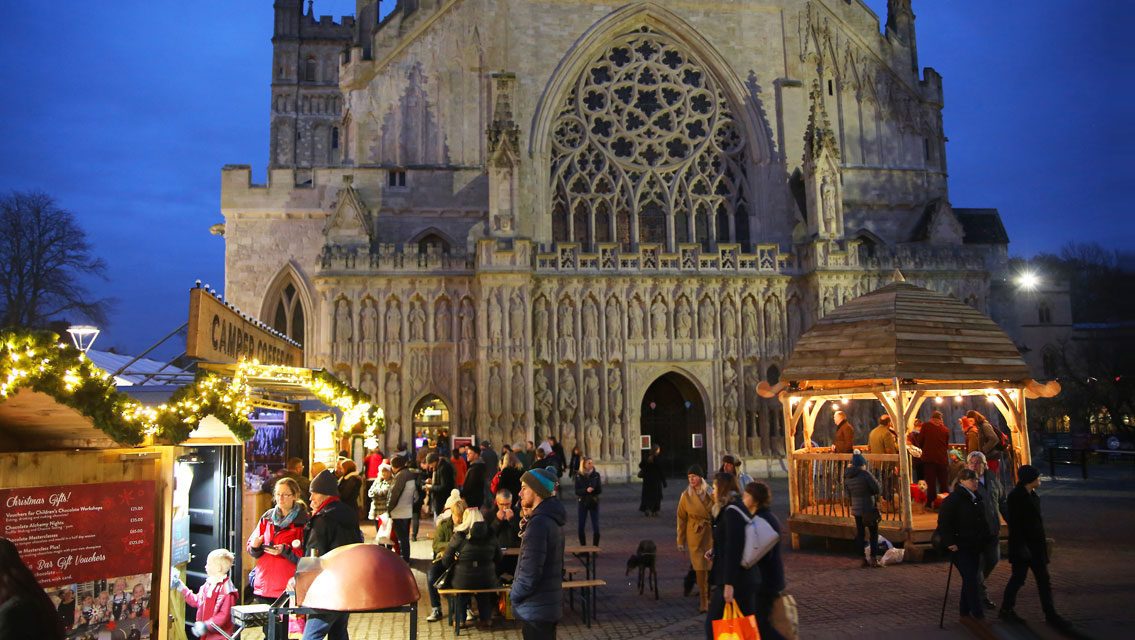 Christmas 2018 will begin in Exeter with the opening of the Cathedral’s Christmas market on Thursday November 15, with the Cathedral hosting its first-ever live ‘tweet-up’.

The market’s opening will mark the start of the city’s festivities. This is the second year the Cathedral has taken over the running of the popular market, and there will be more stalls than ever. Three quarters of the 90 stalls have been taken by local and regional businesses.

Six chalets will be taken by local businesses from In Exeter who will share them for two weeks each, as part of the Cathedral’s commitment to use to the market to boost local traders and businesses.

The Cathedral Christmas market attracts tens of thousands of visitors each year to the city. Some of the paths around the Market have been widened this year, due to the high numbers of shoppers.

The Market will be opened officially by the Cathedral’s youngest Choristers who will sing from the bandstand. And for the first time, the Cathedral itself will also be opened free of charge for the evening so shoppers can wander in to marvel at the scale and architecture of the iconic building before carrying on with their shopping and enjoying the food and drink on offer around the Market.

The Cathedral is also running two competitions. The first gives singers and musicians the chance to star themselves with a slot in the Market’s bandstand.

Local bands, singers and choirs are invited to send in video clips of themselves to [email protected] to be given a chance to play in the bandstand during the market.

And the Cathedral will also host a social media photography competition alongside a live “tweet up” during the popular #ExeterHour. Members of the public are encouraged to visit the Cathedral on the night between 6.30pm and 9pm to take photos for social media, with the winner to get £100 in vouchers to spend at the Market.

The Market will be followed two days later by the switch on of the city’s Christmas lights, and by the start of late night Christmas opening.

“We are thrilled to be able to kick off Exeter’s festivities with the launch of the Cathedral Christmas market. We hope everyone will come and enjoy the launch evening, listen to our wonderful Choristers, wander into the magnificent Cathedral, and sample the best this year’s Christmas market has to offer.

“The opening of the Market is a sign that Christmas really is around the corner.”

The Cathedral Market will be open every day up to and including Sunday 16 December.