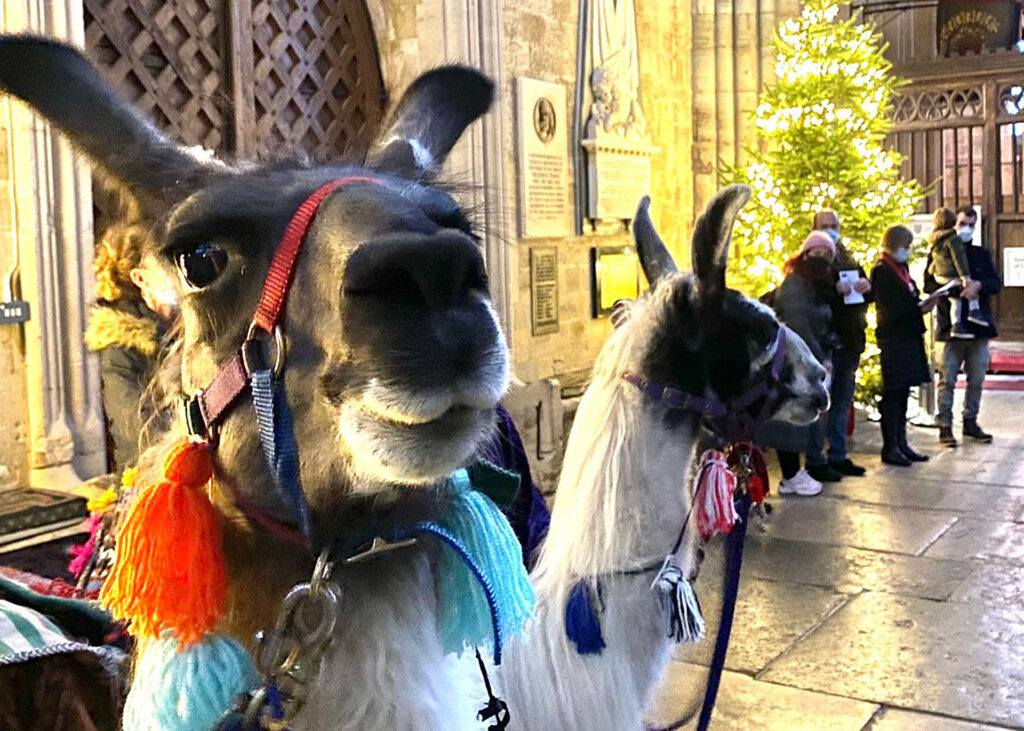 These two docile creatures caused a great stir amongst the children and at the end of the Nativity they stayed around for a while to be petted and photographed. I think they made very good stand-ins for camels and brought a sense of the Orient – even though they came from Sidmouth on this occasion. Their entry caused a sensation and grabbed the attention of even the most inattentive child.

This week we have celebrated the feast of Epiphany, the arrival of the Wise Men or Kings as portrayed in many school nativities. Well, who doesn’t want to wear a crown? I have to confess, I get mildly irritated when I see Nativity scenes with the Kings already in place over Christmas. But there we are, it’s really only symbolic. However, it does mean that sadly this feast of Epiphany  is often overlooked, particularly by secular society. Its relevance is deeply significant, especially to us today. It should cause a sensation and grab our attention. It represents the exposure of the Christ child to the wider world, to us all.

The llamas were stand-ins for camels but there is no stand-in for the Christ child. The Wise Men paid him homage. Do we? After the decorations have been taken down and put away for another year, after the cards have been recycled and the unwanted presents returned to the shop or put aside for another use, the nativity costumes folded away for another year and tea towels (used as Shepherds headdresses) are washed and put back for their intended use, what is left?

Remembrance and celebration of the Word made flesh (John 1:1-14) and dwelling among us is not something which can be easily dismissed for another year until next Christmas season. For the Word is with us as it was from the beginning and will remain with us whether we take notice of it or not.

The account of the visit of the Magi may to many be just another image of the Nativity, just another piece of scenery. But for each one of us it could be a time to grab our attention and give thanks to God for coming to earth in human form to connect directly with us, Emmanuel, God with us.

Cute as the llamas were, enjoyable as seeing children or adults dressed as Kings or Wise Men was, let us not be distracted from the message; that the love and glory of God incarnate shone out from the Christ child into all in the world and will continue to do so into eternity.