The Moral and Political Battle to Eradicate Slavery

Michael Taylor
The Interest: How the British Establishment Resisted the Abolition of Slavery 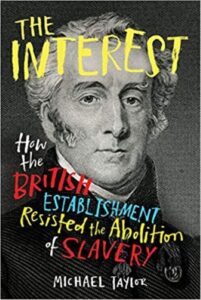 In 1807, Parliament outlawed the slave trade in the British Empire. Yet for the next quarter of a century more than 700,000 people remained enslaved in the British colonies. The campaign for the emancipation of those slaves was fiercely resisted by the ‘West India Interest’ and supported by nearly every leading figure in the British establishment, as well as papers like The Times and Spectator. The pro-slavery establishment went to great lengths to preserve their economic interest.

The ‘West India Interest’ was a powerful collection of wealthy planters and merchants, whose fortunes depended on the enslavement of Africans, along with intellectuals and publishers who deplored the idea of ‘colonial reform’, and Tory government ministers keen to preserve the colonial income. They were the establishment. This book argues that, rather than Britain being at the forefront of opposition to slavery, the ‘nation’ was in fact deeply implicated in, and violently supportive of, colonial slavery. It was a moral and political battle to eradicate slavery.

The horrors visited on millions of Africans over centuries cannot be underestimated. Taylor says this is the first narrative history of colonial slavery that seeks to give equal space to the pro-slavery figures who finished up on the wrong side of history. It weaves together a rich set of stories, providing great insights into the thinking and actions of both sides. The writings and speeches of leading personalities provide some of the evidence and, although the direct stories of slaves are few and far between in the archives, they are well reported in the story. Indeed, they were part of the campaign to show that the treatment of slaves was unlike the information being shared back home in England.

In the face of unrest among the slaves, the Caribbean planters set up the Colonial Church Union (CCU), which visited violence on missionaries whom they blamed for encouraging the slaves to seek their freedom. There was widespread collusion between the CCU and the legal authorities, so victims had no recourse to justice. The Quakers and non-conformists were in the vanguard for reform, later joined by some Anglican Evangelicals. Most of the Church of England remained pro-slavery. John Henry Newman, then an Anglican Priest in Oxford, preached against giving freedom to slaves. He later became a Cardinal and in 2015 was made a saint.

Both sides deployed propaganda, with the West India Interest able to deploy vast resources to out-publish the anti-slavery campaign. Yet the story is as much about the politics of the time. Members of Parliament were the only ones able to change the law. As long as the Rotten Boroughs existed (where it was easy to fix the election of pro-slavery MPs), then there remained a majority in parliament opposed to abolition and subsequently emancipation. After the Tories lost power, the Whigs succeeded in getting the Reform Bill passed through the Commons in the early part of 1832, but it was later defeated in the Lords. This led to the government resigning, huge unrest in the streets and, eventually, the Tories in the Lords allowing the Bill to pass. The Whigs returned to government, the Rotten Boroughs were abolished and, after real people were given the vote, a majority of MPs in Parliament favoured the emancipation of the colonial slaves.

Slavery survived until 1 August 1834 when the act was passed in Parliament to give slaves their freedom. To get that agreement with the slave owners, the government paid them compensation worth £340 billion in today’s money. It was around 40 per cent of GDP and the largest ever pay out by government. The debt was finally paid off in 2015. No compensation was offered to the slaves who remained ‘in apprenticeship’ on the plantations for four more years.

Courageous people stood up and fought a long hard fight to win the freedom of colonial slaves. This book tells their stories, alongside the stories of those who fought a strong rearguard action to preserve the status quo. It was the collapse of the Tories, the reform of Parliament, favourable Cabinet politics, and slave rebellions in the Caribbean, that turned the tide. A fascinating and disturbing tale that shines a light into the shadows of our British history.