The Good Ancestor: How to Think Long Term in a Short-Term World

The Good Ancestor: How to Think Long Term in a Short-Term World 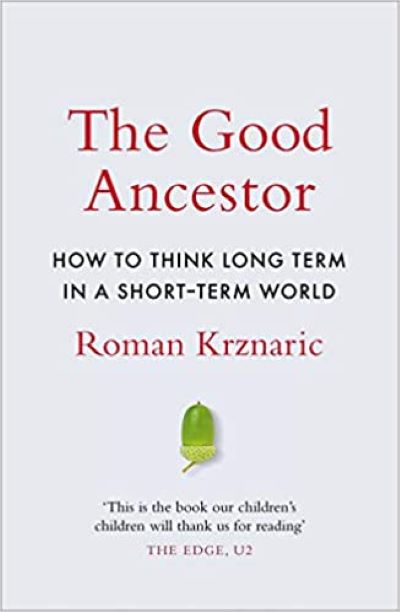 Our world is inherited from the past. Decisions made decades and centuries ago, for better or worse, have created the world we experience. Are we being good ancestors to future generations?

We wrestle with many drivers of short-termism from digital distractions driving our dopamine system, short electoral cycles, speculative capitalism, and the pursuit of quarterly economic growth. Yet as humans we are able to think beyond our own time span. This book provides six ways for us to think long term. These act as an aide memoir in our tug of war with the apparent acceleration of time and the need for quick results.

Roman Krnaric, described as a public philosopher, delved into how our brain is wired for both what he calls the ‘marshmallow moment’ and the ‘acorn’. He sets out six chapters outlining his pragmatic ways to bring the acorn mindset to the fore.

Interestingly the clock is a fairly recent innovation in our human existence and moved us from cyclical rhythms to a linear arrow of time. Humankind is but an eyeblink in cosmic history. We have a ‘crisis of perspective’ as our time horizons shrink to seconds, hours, and days at a point when our species survival depends on a broad and long-term view.

The first idea is to have ‘deep time humility’ that offers us a perspective on purpose rather than the last tweet or the next deadline.

Some of Krznaric’s ideas are fairly obvious, although he does bring some interesting research to his writing. It is no surprise that thinking of the legacy we leave behind and how we will be remembered is idea number two. At three is ‘intergenerational justice’. He sets out powerful reasons for us to respect the seventh generation. The impact of our actions in relation to climate change are at the heart of justice for future people. Much of the policy debate revolves around the costs of action today in comparison to the wealth of those in the future. Economists apply a ‘discount rate’ to the future when building their models to see what level of investment we should be making today to avoid harming those who will live in the next century. This chapter provides an excellent summary of the issues that arise from applying different discount rates.

The fourth idea is another obvious one – to plan and build for the distant future. He calls this chapter ‘cathedral thinking’ and provides examples from religious buildings, infrastructure, public policy, and science where human capacity for the long view creates benefit.

A more interesting chapter is the fifth, a way of holistic forecasting. Forecasting the future is certainly not an accurate science but Krznaric advocates looking at the ‘big-picture prospects for people and planet on a global scale’. Nothing grows forever is a powerful lesson drawn from the s-curve where initial growth develops into maturity and then decline. The global population or GDP cannot continue to grow decade after decade.

The final idea links back to the first by focusing on identifying a transcendent goal for humankind. Such idealism lacks practicality in a world that struggles to agree actions to reduce carbon emissions. Potentially if we make that idea more local, or even personal, it might gain some traction.

The last section of the book tells the stories of people trying to ‘bring on the time rebellion’ in the fields of politics and economics, although it talks mainly about ecology and culture. There are some interesting insights from around the globe and plenty to consider, but I was left underwhelmed. Just as I was with the book as a whole.