The Desert Mothers and Mindfulness

By The Revd Canon Cate Edmonds

I’m not sure what piqued my sudden interest in the Ammas, the Desert Mothers, but I was keen to find out more.

Mary C. Earl, writing in her book ‘The Desert Mothers, Spiritual practises from Women in the Wilderness’ said: “the ammas or spiritual mothers were women who offered their wise counsel to others and who through that counsel became lovers of souls.” 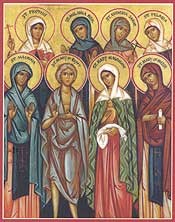 We may well have heard of the Desert Fathers, we may have read some of their sayings, but Desert Mothers and their sayings are not as widely known. It is believed that there were just as many women as men who left their established lives and sought to live in a community or as hermits in the deserts of the countries we now know as Egypt, Israel, and Syria. The mothers, like their male counterparts, sought to embody the Christian Faith in a simple, straightforward manner, shaped by the habitual practise of silence, solitude and stillness. Many of the Ammas balanced these practises with generous hospitality, charity and forbearance. A key characteristic was that they refused to judge anyone, truly living out the commandment to love your neighbour.

Like the Desert Fathers, the Ammas have left us many sayings – although, sadly, far fewer, they are just as pertinent. “We must direct our souls with discernment” is an interesting saying from Amma Syncletica.

Syncletica was born into a well respected and fairly wealthy family in Alexandria in the fourth century. She was one of four children; sadly her two brothers died and her sister was blind. When her parents died she gave all the family wealth away, cut off her hair and set out for the desert with her blind sister. Syncletica is recorded to have believed that life was so crowded with so many cares and concerns that the capacity to choose well was forgotten or weakened.

Could this be true to us today? Are our lives filled with discussions which can put too much pressure on us and not help our mental health. Syncletica practised what perhaps we would now call mindfulness. With her sister they slowed down, contemplated prayerfully, and then made their decisions. They didn’t suddenly retreat to the desert but prayerfully considered a more simple life, following the teachings of Jesus.

Syncletica advises us to slow down and to become aware of all that occurs in our daily lives and to discern what is important and what is not. To pay attention to the now – and not to be striving for the next – enables discernment of what is truly important in our lives.

There is, of course, much more to understanding the teachings and reflections of Syncletica and the other Ammas. I commend to you a little exploration into the lives and sayings of these incredible women whose voices for too long have been silent.