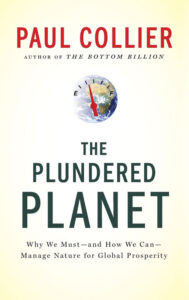 How can poorer countries become richer and avoid damaging the planet further? How to reconcile the desire for profit with the romantic views of environmentalists? We cannot bury our heads in the sand – this book helps us understand the issues and presents carefully thought out potential solutions.

Paul Collier, an Oxford professor of economics who has spent his career studying the economic situation of the poorest in the world (the bottom billion), is well placed to explore the role and ethics of nature in the global economy. He proposes a synthesis of values. Environmentalists argue that nature is an asset for which humanity has special responsibility whilst economist say that nature is an asset to be used for the benefit of humanity. We are not curators seeking to preserve nature in its current form, rather we are custodians of the value of natural assets. Collier argues that our obligations to the natural world are ‘essentially economic’.

Critics of the synthesis of values are described as the ‘ostriches and the romantics’ The ostriches will plunder our natural resources. Plunder is when the resources of nature are used for private gain or short-term advantage and future generations gain nothing. The romantics will leave the potential of nature untapped and the bottom billion will be left in poverty. Collier is concerned that plunder is undertaken under the guise of apparently legitimate actions; it is often unrecognised. There is a chain of decision making that can break at the weakest point and create the conditions for plunder.

Collier provides a formula to summarise the challenge of harnessing nature: nature + technology + regulation = prosperity. A lack of regulation leads to plunder. Each part of the decision chain is examined to see where corruption due to the lack civic society and regulation create the conditions for plunder. Norway is held up as a world leading example where the value of the natural asset has been preserved for future generations through the sovereign investment fund. Strong regulation covering the discovering, extraction and investment has generated prosperity.

Perhaps the most interesting part of the book is when Collier considers whether fish are a natural asset and what liabilities we create from producing goods that generate carbon. He predicts that carbon emissions will migrate from the rich to middle income countries and carbon taxes may not be sufficient as governments game the system for their own advantage. There is a challenging chapter about the need for cheap food; Prince Charles and other ‘romantics’ opposed to genetically modified (GM) products are criticised for not understanding the needs of the poorest for affordable food.

Collier’s motivation in writing the book is to inform citizens so that they can challenge governments to achieve formal international co-operation and transparency so that plunder is no longer possible. His critique of the unethical exploitative decision making chain and the romantic environmentalist who want to stop industry and leave the poorest without hope, is clearly and thoughtfully set out. He seeks a middle ground based on the ‘ethics of custody’ – the value of nature is to be conserved. Critics of his approach will say that his focus on the economic aspect of value may well oversimplify the complexity of how humanity values nature in its many forms. It is a book to make you think about our relationship to nature – it is not as simple as some would have us believe.