Falling in Love at First Sight

By the Revd Canon Ian Morter

I can recall very vividly the day when my heart was claimed. It was in October 1974, a Wednesday, towards the end of the month.  I had just started as an undergraduate at Kings College London. I was on my way back from the Strand Campus to my hall of residence in Westminster so I usually passed through Trafalgar Square, so I decided as it was a half-day with no afternoon lectures that I would drop in to the National Gallery. It was not my first visit but one of great significance for the rest of my life. As I was walking through the many room of the Gallery there I lost heart, for it was the first time I saw the Wilton Diptych. One of the greatest late medieval treasures in our national collection.

It is a picture painted on two hinged wooden panels (each 53 x 37 cm) allowing this devotional piece to be easily moved yet protected from damage. It was at one time in the ownership of the Earls of Pembroke who reside in Wilton House near Salisbury, hence we have its poplar name The Wilton Diptych. It is understood to be the personal devotional aid of King Richard II and may have been the gift of his wife to towards the 14th century King of England. 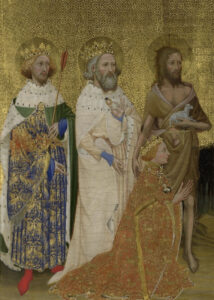 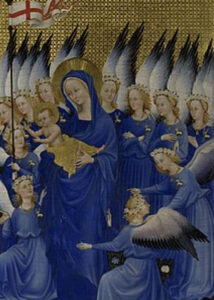 So why was it love and first sight? It is a gem of religious art that depicts Richard II kneeling before the Madonna and Child surrounded by an angelic host. The King is being presented by his own personal patron saint, John the Baptist, and by the English saints, King Edward the Confessor and King Edmund the Martyr (R-L), each of them is holding their attributes a lamb, a ring, and an arrow. The infant Christ is blessing Richard as he is being presented with the Standard of England, symbolising his care of the realm which alone is in the gift of God. The diptych was a costly gift, an outstanding example of International Gothic, probably painted in either France or England. It uses the very best materials including lapis lazuli, vermillion and gold leaf. Definitely a royal gift befitting of a queen to her husband the king. The fact that it is a fine example of religious art is not the only reason for a framed reproduction being on my walls at home for over three decades.  It is the concept that we may well have saints with whom we feel especially connected as did King Richard. Perhaps he chose John the Baptist as he came to the throne in June 1377 and John’s feast day is 24th June. Perhaps the diptych includes three Kings, two of whom were saintly Kings of England, because Richard was born on the 6th January 1367 the day the Church recalls the visit of the three kings to the infant Jesus to pay him homage and present their gifts.

This has caused me to wonder who would be the saint that I might take as my patron. From my teens I have been an admirer of St Francis of Assisi. Perhaps because of visits to the Franciscan’s House in London’s East End and a pilgrimage made a decade later to Assisi. A ten year incumbency at St Francis, Woolbrook in Sidmouth, were both my children were baptised. An admiration of the beautiful Canticle of Creation written by Francis towards the end of his life. It expresses so much insight on what we have now realised in our own time about the interdependency of the created order for the worlds well-being. Finally an admiration of the Franciscans as one of the mendicant orders that rest lightly to material things, adopting the principle of traveling and living in urban areas to preach the Gospel, and ministering to the poor. The Franciscan order avoids owning property, they do not usually work at a profession or trade and its members often live an itinerant lifestyle. They depend for their survival on the good will of the people to whom they serve and evangelise. I am not cut out to be a Franciscan, I prefer stability and familiarity. The challenge of the simple life is not one I would readily embrace, but St Francis is definitely the saint I would say is my patron.