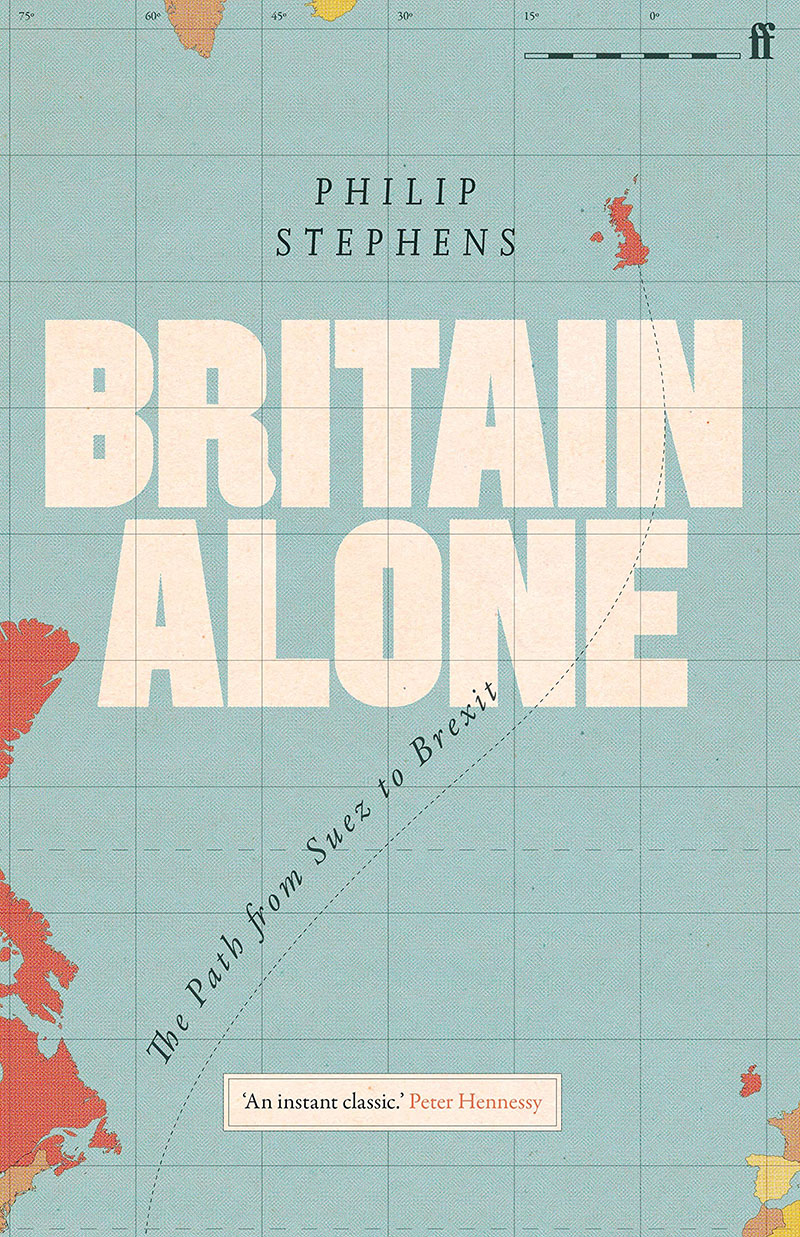 Philip Stephens
Britain Alone: The Path from Suez to Brexit

In 1962 Dean Acheson, an American statesman, stated that Britain had lost an empire and failed to find a new role. Having found a role as the best friend of America and a member of the European Union we have now given up our place in Europe and find ourselves alone clinging to vestiges of power, such as nuclear weapons, and catch phrases of being a ‘global Britain’.

Tracing the history of Britain’s foreign policy from the post war withdrawal from empire, the humiliation of Suez up to the Boris Johnson hard Brexit, this is both a fascinating and depressing account. Philip Stephens, a political journalist with the Financial Times, has had a ringside seat as policy makers have tried to be European and have a special relationship with America.

This is a story in which realism has often taken second place to emotion. Sir Henry Tizard, a distinguished Whitehall insider, wrote in a post war memo stating that ‘We are a great nation, but if we continue to behave like a great power we shall soon cease to be a great nation.’ That observation weaves it way through many key moment of post-war Britain. It is a story of inflated ambition and diminished circumstances. A fight to hold onto the glories of the past.

The book is structured around key events and the political leaders. Starting with the secret deal between Britain, France and Israel to deploy troops to retake the Suez Canal that resulted in a humiliating withdrawal under American pressure. The speed with which Prime Minister Eden had bent to American requirements confirmed in the minds of the French and other European countries that Britain would put the relationship with the USA above that of fellow Europeans.

Britain chose to sit out the talks to create the European Coal and Steel Community which become the European Economic Community (ECC) in 1957 because Eden thought Europe too small an arena for British engagement. Britain looked to America, the Commonwealth and remaining colonies. Attempts to join in the early 1960s were vetoed by President de Gaulle. When membership was achieved it was on the basis of accepting the rules of the club – a problem the UK has had ever since. The threads that connect to Brexit are evident from the beginning of British membership.

The illusion of power is told in illuminating chapters on acquiring a so-called ‘independent’ nuclear bomb and the defence of the pound in the face of economic decline. The style of the book is to focus on the issues by Prime Ministers and how they played the relationship with Washington, Europe and the wider world. From Thatcher on it is more detailed in terms of personal inclinations towards Europe and America. Maggie moved from supporting membership of Europe to becoming hostile and rallying opposition to John Major’s relations to our nearest neighbours.

Stephens has written previously about Tony Blair, so he provides detailed insights into his enthusiasm for full engagement with Europe yet being derailed by his subservient attitude to Washington and committing British troops to the Iraq war. Mr Cameron is heavily criticised for not having a clear sense of direction and seeking to solve the Conservative Party civil war by offering a referendum on membership of the European Union. Teressa May and subsequently Boris Johnson do not come out well from the piercing analysis and inside comments that are meat and drink for a political journalist. One of the most concerning conclusions is that Brexit could be the catalyst for the eventual break-up of another union close to home.

Sadly, we continue to hear the rhetoric that Britain is a super-power – now in science and solving problems and being able to deploy an aircraft carrier to the far east. The web link to the latest government review of foreign policy illustrates well the fact that Britain is struggling once again to find a new role in the world. Washington now calls Berlin rather than London as the UK government is no longer the bridge to Europe. No longer part of Europe, with a diminished relationship with America and a shrinking military is the reality we now face.

Peter Hennessy, the eminent historian describes this book as ‘an instant classic’. A penetrating analysis superbly written and a great read. Some may not agree with the pro-Europe stance, yet the author is thorough and gives credit and criticism to the many political characters mentioned. Britain remains a proud nation – this book tells the story of how we got to where we are today.