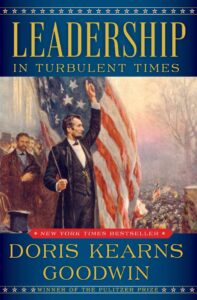 Build, build, build – the latest mantra from Downing Street. Some suggest the government is trying to follow the example of President Franklin D Roosevelt’s ‘New Deal’ that helped America recover from the great depression of the 1930s. This book gives insights into four US Presidents, Abraham Lincoln, Theodore Roosevelt, F T Roosevelt and Lyndon Johnson, who each faced both personal and leadership challenges from which we can learn in our own turbulent times.

Written by a leading historian and Harvard Professor, Doris Goodwin, who worked alongside President Johnson and has studied the lives of each of these Presidents in detail. Each man found his vocation in politics. The story begins with as they enter public life in their twenties, with different backgrounds from Lincoln’s relentless poverty and determination to succeed as a self-taught lawyer to the privilege and wealth of the Roosevelts. They were recognised as leaders early in their careers showing hard work and a remarkable ability to motivate others each in their own way.

Part two describes the dramatic reversal of fortunes in their public and personal lives; Lincoln’s loss of reputation, Theodore’s young wife and mother died on the same day, Franklin struck down with polio and left paralysed and Johnson losing an election to the Senate. Each pulled themselves back into public life and learnt hard lessons from these events, which later carried them through turbulent times.

The third part tells how they each arrived in the White House – each to face a huge test of character and leadership. Lincoln arrived at the start of the civil war and kept the sense of purpose in the abolition of slavery at the core of his diverse administration. He brought together a team of rivals to ensure strong commitment to the cause to win the war. Theodore Roosevelt and Lyndon Johnson assumed the Presidency after assassination of the incumbent. Franklin Roosevelt faced the huge economic upheaval and then World War 2. All died early in their sixties, Lincoln killed just as the civil war ended whilst enjoying an evening at the theatre.

Goodwin assesses Lincoln and both Roosevelts as among the greatest of US Presidents. With Johnson she finds it harder to place him in history. He did remarkable work domestically to help move race relations forward but will be remembered for embroiling his country in the Vietnam War.

The hope is that these stories of leadership in times of fracture and fear will prove instructive and reassuring – they set a standard for others to aspire to. My hope is that learning from such great leaders goes beyond the words build, build, build to action that is inspiring and inclusive.