Opening One’s Mouth and Putting One’s Foot in It

Earlier this week on, Monday 29th June we celebrated St Peter’s Day, the patron saint of our Cathedral here in Exeter. Long before I came to the Cathedral I had a great affection for St Peter, perhaps it was because I was confirmed in St Peter’s in the Forest, Walthamstow. Or perhaps because I was ordained more than four decades ago at Petertide. But I think what is most endearing to me about St Peter is that of all the Apostles he is like so many of us. He was an ordinary person, hardworking, enjoyed the company of others and above all he often readily gave his opinion, perhaps one could even say he was outspoken. As the title of this piece implies he sometimes ‘opened his mouth and put his foot in it’. But perhaps that is going too far in describing our Blessed Peter. Peter was perhaps the spokesman, the disciple who put into words what the other eleven were thinking but did not have the courage to voice. Hence his confession at Caesarea Philippi, when Jesus asked the twelve “who do people say that I am” and then went on to ask the disciples “But who do you say that I am.” It was Peter that spoke out and boldly said “you are the Messiah, the Son of the Living God.”

Recorded for us in both Mark and Matthew’s Gospels, is the occasion when Jesus speaks to the disciples about his forthcoming passion and death, Peter speaks out and remonstrates “God forbid it, Lord! This must never happen to you.” He had not grasped the nature and direction of Jesus ministry, Peter ‘open his mouth and put his foot in it.’ Jesus abruptly replies, “Get behind me Satan! You are a stumbling block to me; for you are setting your mind not on divine things but on human things.”

All four Gospels tell of us that just before his arrest, Jesus told the disciples that they would all let him down. Peter boldly declares that even if all the others fall away he would not, he would even die for him. Jesus looks earnestly at Peter and foretells that before the next morning Peter would have denied even knowing him.  And we have in the Gospels the moving account of how Peter in the precincts of the High Priest’s house, is challenged three times about being a member of Jesus followers. Three times he denies even knowing him, just as Jesus had predicted. When dawn was breaking on that first Good Friday the Cock crowed, and Peter recalled Jesus words, went out from the courtyard and ‘wept bitterly.’

It is that scene that I want to recall for you in one of the paintings I have been fortunate to see in the Bowes Museum in Castle Barnard. It is entitled The Tears of Saint Peter or Penitent Saint Peter it is by El Greco (meaning “the Greek”), who painted it at the end of the 16th century. 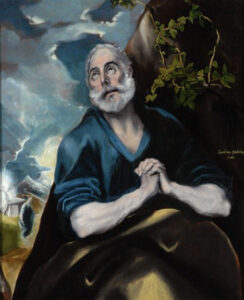 This is thought to be the earliest of six paintings that El Greco completed of the same subject. We see depicted that moment when Peter is distraught with remorse, teary eyed, looking heavenward, hands clenched in prayers of penitence, kneeling asking for God’s forgiveness.

El Greco was a most distinctive painter, he was born in 1541 in Heraklion in Crete and baptized Domenikos Theotokopoulos. He was initially trained in the Byzantine style of icon painters which explains his unnatural flesh tones. In 1567 he moved to Venice and studied with the famous Venetian masters Titian and Tintoretto.  About ten years later he moved to Toledo in Spain where he spent the rest of his life. El Greco’s developed his own distinctive style of a vivid palate, swirling compositions of elongated figures that are often considered to be a fine example of what is called the ‘Mannerist Style’. His work had profound influence on generations of artist from Velázquez to Picasso.

But back to St Peter, one of the readings for St Peter Day is from St John’s Gospel chapter 21. It is one of the resurrection appearances, when Jesus had given breakfast to seven of the disciples after a miraculous catch of fish. Having had breakfast Jesus takes Peter aside and forgives and restores Peter by asking him three times if Peter loves him. Each time there is a new emphasis. Peter do you love me more than the other disciples? Peter starts in his usual confident way ‘Yes Lord, you know that I love you.’ Jesus says ‘Feed my lambs’. Then Jesus ask the question a second time, and Peter, perhaps a little less sure of himself answers again ‘Yes Lord, you know that I love you.’ Jesus says ‘Tend my sheep.’ Jesus asks the same question a third time and Peter is hurt by being asked yet again and replies ‘Lord you know everything, you know that I love you.’ And Jesus says ‘Feed my sheep’. It is as though Jesus has to take Peter back, recalling the three time he denied even knowing him and then by Peter’s repentance, restores him as the leader of the apostolic band. Thrice denied and thrice forgiven.

This story of Peter’s restoration and his commissioning has many resonances for me and for all who God calls into lay and ordained pastoral ministry. We are called to share in Christ’s own ministry of care for the Christian community, one which he first shared with Peter.

In conclusion, there are instances that I can recall in my own discipleship when I have ‘opened my mouth and put my foot in it.’ Times when I have said and done those things which like St Peter I am not happy about. As I said at the outset, I am encouraged by Peter, a person who is like so many of us, but who by the grace of God is given the opportunity to try again and hopefully faithfully serve Christ.

PrevPreviousReview: Stories of Leadership in Times of Fracture and Fear
NextRe-opening for Worship from Sunday 5 JulyNext
© 2022 Exeter Cathedral. All Rights Reserved.
Safeguarding