Review: Remarkable Study of Exeter is the Latest Addition to Foyle’s Cathedral Series 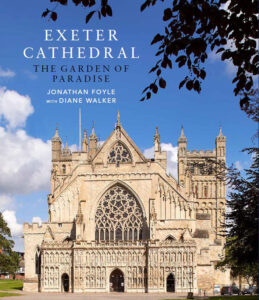 This is the fifth and most recent book in Jonathan Foyle’s series of studies of English Cathedrals featuring Canterbury (the longest of the set at 208 pages), Lincoln, Lichfield, Peterborough and now, Exeter (128 pages). The book is lavishly illustrated with specially commissioned photographs, supported by the Friends of Exeter Cathedral and is, like the cathedral itself, full of colour. But, beautiful to look at though it be, this is no mere coffee table book; on the contrary, it offers the latest scholarship concerning the design of the Norman cathedral and presents new ideas about the construction and design of its Gothic successor. Dr Foyle traces the history of Exeter Cathedral from its origins in 1050 when Bishop Leofric was installed in St Mary Major through to the damage of World War 2 (including a dramatic and newly discovered photograph of bomb damage taken from the North Quire Aisle looking South through the arcades to the buildings beyond where the Chapels of St James & Mary Magdalene have been obliterated).

Foyle emphasises Exeter’s royal connections throughout the cathedral’s history and its bishops’ involvement in national politics. Most significant were the founding of St Mary Major by King Aethelstan and its re-founding by Canute after destruction by Vikings; Bishop Leofric as chaplain to Edward the Confessor and his installation at St Mary Major by King Edward & Queen Edytha; Bishop Bartholomew’s preaching at the re-consecration of Canterbury Cathedral in 1171 bringing, Foyle suggests, relics of the martyred archbishop back with him to Exeter; possibly most significant of all Bishop Stapledon, Lord High Treasurer to Edward II, maybe accounting for the arrival of the royal mason Thomas of Witney in Exeter; and so the story continues with the various royal connections of Bishops Lacy, Courtney and Oldham.

Dr Foyle takes the reader into the medieval mind where symbolism and metaphor held an important place. Although now it is the Cathedral’s dedication to St Peter that is well known, Dr Foyle emphasis that it was Mary who was once the dominant dedicatee. In the medieval period Exeter was an old imperial fortified city providing sanctuary. Mary was associated with fortified places which represented her virginity. She was often shown in medieval art within a garden of perennially blooming flowers and fruit, defended by locked gates and crenelated walls; this represented heaven and it was St Peter who held the keys; he was the gatekeeper to Mary’s heaven. Marian theology, as propounded by archbishop Anselm and others at the turn of the 11th/12th centuries had a profound influence over cathedral builders at the time and was to guide the evolution of Exeter Cathedral until the completion of the gothic building.

Many have remarked on the variety of tracery patterns in Exeter’s windows, but this book emphasises the frequent use of an oculus at the top (particularly the large windows at the four cardinal compass points) citing the example of Lincoln Cathedral’s great east window. These, Foyle maintains, represent a floral pattern, the cusps evoking petals, a feature he links to Marian churches, providing a table to illustrate this. Another Exeter feature which Foyle covers in detail is the cathedral’s “superlative array of finely sculptured bosses… one of the chief glories of English art.” Appearing, as they do, towards the end of the 13th century they come at a time when there was a move towards naturalism in sculpture. Individual plants or animals came to be associated with specific theological ideas or personalities, the rose, the lily, eg, with Mary, columbine with the Holy Spirit, the goldfinch with the bloodied Christ, etc. The book illustrates several bosses and other carvings, such as the huntsman’s faithful hound proudly showing off his procreative endowments, describes them in detail and interprets the theology behind their subject matter. Not only is Mary represented in the symbols of its windows and the carving of flowers on its bosses and corbels, the exterior of the building is made to look fortress-like with turrets, crenelations, arrow slits etc, representing Mary’s defensible garden.

Most of all, the book is remarkable for Jonathan Foyle’s new theory about the construction of the gothic cathedral. At last the anomaly is discredited whereby we are told that it was Bishop Bronescombe who planned the construction of the new gothic cathedral, starting with the three eastern chapels, despite historical sauces attributing the new building to Bishop Quivil. Indeed, Foyle attributes the project of a new cathedral within a defensive wall to the visit of Edward I at Christmas 1285 following the murder of Precentor Lechlade. Furthermore, on both historical and stylistic grounds, Dr Foyle places more importance on Lincoln as an influence on the new Exeter Cathedral than the earlier and geographically nearer Salisbury. In other words, Exeter was probably inspired by Quivil’s actual attendance at the consecration of Lincoln’s new Angel Choir (1286) rather than by Bronescombe’s assumed attendance at the consecration of Salisbury (1258).

Foyle’s theory is that Bronescombe added the chapels of SS James & Mary Magdalene and SS Andrew & Catherine to the Norman building and that—here is the exciting part—he added the chapels of St John the Evangelist and St Gabriel to the east end of Bishop Brewer’s lost Lady Chapel which projected eastwards from the Norman apse. These eastern chapels were then ingeniously joined to the west end of Quivil’s new Lady Chapel at the east end of his new gothic cathedral. As well as drawing our attention to misalignments, height discrepancies, etc, Foyle points to stylistic features of tracery and piers to support his theory. The book goes into some detail over the crossing and how the gothic cathedral was determined by the proportions of its Norman predecessor. Dr Foyle also proposes a new theory about how the Norman towers (the unusual siting of which he ascribes to the influence of Old Sarum) related to the rest of the building.

After reading these new theories about the three eastern chapels and about the Norman crossing one regrets that the book is not long enough for a similarly detailed examination of St Edmund’s chapel to the north of the west front. This chapel, where nothing lines up properly, raises many questions and it would have been good to have Dr Foyle’s thoughts on the matter. Maybe more pages may also have allowed for a fuller exploration of the change of design at the triforium level of the Quire. Given that one of the most important theories propounded in the book is the attribution of the Lady Chapel and its two lateral chapels to different building campaigns, it is strange that they are not distinguished by different colours in the plan at the back of the book. But these are small matters largely concerning a hunger for more!

This is a fascinating book which will interest both those familiar with the building and visitors. To anyone interested in its architecture, its place within medieval art and history the book is a must buy. It will be of equal interest to those for whom it is the local, rather than national, story that is important. Like the other books in the series it repays multiple readings as much as the casual glance. I warmly recommend it to congregation, guides, stewards and scholars alike.

Exeter Cathedral: The Garden of Paradise is available from the Cathedral Shop. Price £20.