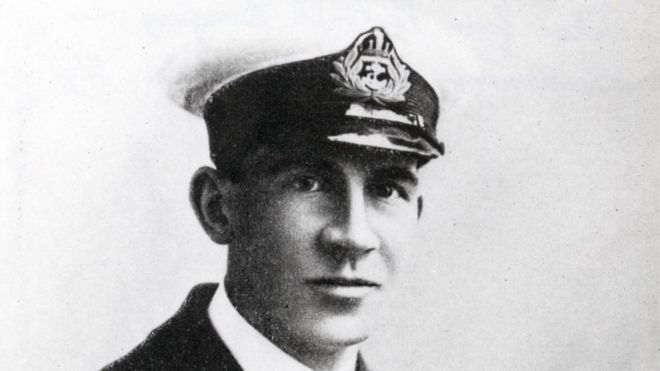 On 23rd April we remembered the centenary of the daring and hazardous “Zeebrugge Raid”, and particularly the involvement of the Sandford brothers (Francis and Richard) who were brought up here in Cathedral Yard whilst their father Ernest Sandford was Archdeacon of Exeter.

By April 1918, German U-Boats operating out of pens at the port of Bruges – Zeebrugge were still menacing Allied shipping in the channel. The British operation planned to block the canal entrance with 3 ships to prevent the U-boats entering the North Sea. Now the main problem was that the canal entrance was protected by a mile-long harbour wall (Mole) that curved out into the sea. This mole housed German defenders and was connected to land by a viaduct and part of the attack was detailed to destroy this lifeline. The Royal Navy planned to use submarine HMS C3, packed with explosives, to ram the viaduct and destroy it. Much of the planning for this daring raid was carried out by Captain Francis H Sandford and he would also a command a picket boat to evacuate the sub crew.

His brother, Lt. Richard Sandford commanded HMS C3. On St George’s Day 1918, the attack went ahead at midnight. Richard Sandford’s sub was packed with explosives and had gyro assisted navigation and the idea was that he would set it and evacuate some distance away. But he didn’t trust its accuracy and rammed his sub right into the viaduct. He evacuated his crew into a skiff and then lit the fuses himself, before escaping. The viaduct was blown to smithereens and a detachment of German cyclists hurrying to the scene all disappeared over the end. The mole was isolated but the marine landing parties met terrific opposition but the ships were duly sunk at the canal entrance.

8 VCs were awarded including one to Richard Sandford. Over 500 British casualties. Canal remained blocked for only 3 weeks. Sadly Richard died of typhoid within weeks of the Armistice.

A blue plaque was unveiled in Cathedral Close (at a site used today by Exeter Cathedral School) in September 2016.

A commemorative flagstone was laid in Exmouth, where the family made their home following the death of Ernest Sandford, in April 2018. 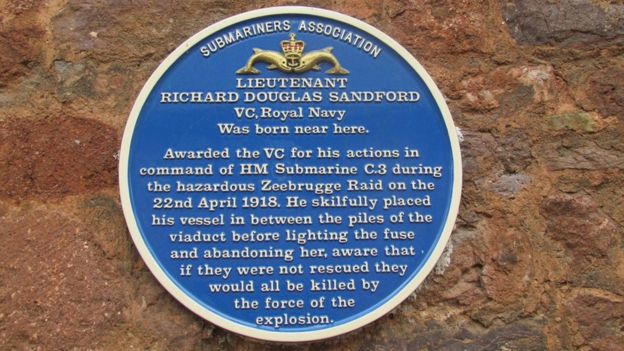