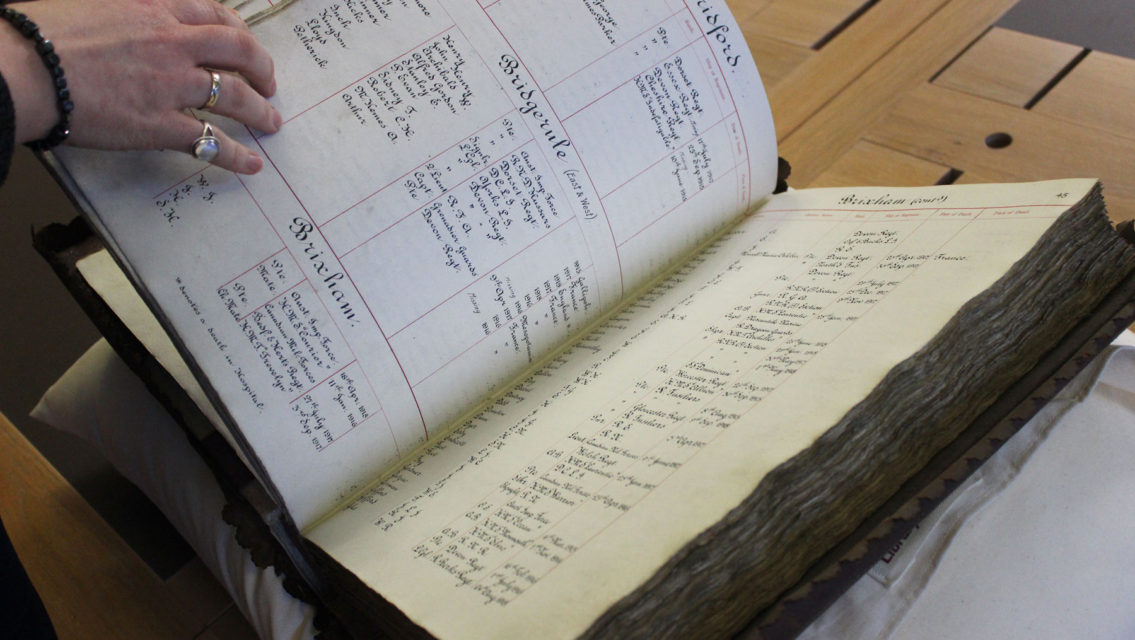 During the 2018 Remembrance season, the Dean and Chapter’s copy of The Devon County Roll of Honour is displayed in a cabinet in the South Transept open at the page on which the name of Richard Douglas Sandford (see bronze memorial plaque in Exeter Cathedral or read more about him here) is inscribed. It is in the list for Littleham, a parish in Exmouth, where his mother lived following the death of his father in 1909.

Also on this page is the name of another holder of the Victoria Cross from the same Exmouth parish: Flight Sub Lieutenant Reginald Alexander John Warneford of the Royal Naval Air Service.

At 1:00 am on 7th June 1915, Warneford set off in his tiny aeroplane (Morane No. 3253), loaded with six 20 lb bombs, under orders to look for Zeppelins and attack the Berchem St Agathe Airship Shed. After only 15 minutes, he spotted a Zeppelin apparently over Ostend and proceeded to chase it. When he got close, the airship opened fire. As Warneford retreated to gain height, the airship turned and followed him.

Warneford managed to get well above the Zeppelin (then at a height of 11,000 feet). He switched off his engine to descend on top of the Zeppelin. When close, he dropped his bombs. Whilst releasing the last, the Zeppelin exploded, lifting Warneford’s aeroplane and turning it over. It was of control for a short period and went into a nose dive. Fortunately, Warneford was able to regain control and he then saw the Zeppelin on the ground in flames.

The joint on the aeroplane’s petrol pipe and pump from the back tank was broken and Warneford was forced to land in enemy territory. He made preparations to set the aeroplane on fire so that it wouldn’t fall into enemy hands. However, when he realised that he hadn’t been seen, he set about repairing the joint, reportedly with his cigarette holder. After some initial difficulties starting the engine, he managed to take off.

Unsure of his location, he eventually landed and discovered that he was at Cape Gris Nez, where he was given petrol by French soldiers. When the weather cleared, he took off once more and arrived back at his base at Veurne on the Belgian coast by mid morning.

The next day, Warneford received a telegram from King George V conferring the Victoria Cross on him. Tragically, less than two weeks later, on 17th June, he was killed in a flying accident over Paris.

‘Rex’ Warneford was a national hero. 50,000 people lined the streets for his funeral and he was buried with full military honours in Brompton Cemetery, London.