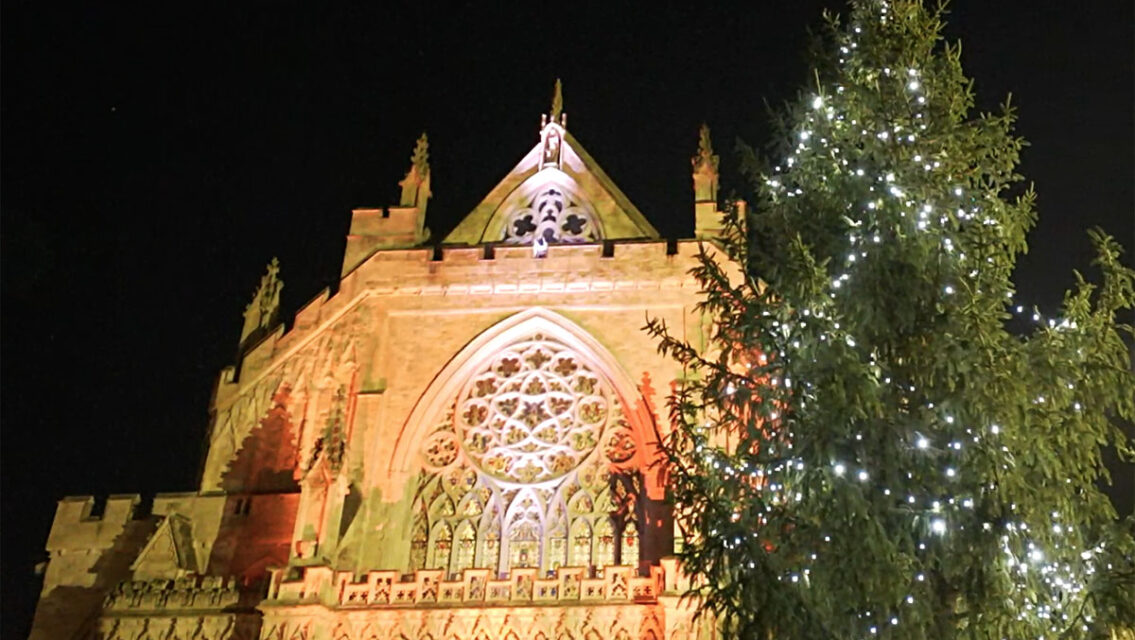 One of the refrains that I hear repeatedly just now is ‘It won’t be the same’ frequently said in a tone of lament and often about something to do with Christmas. It ranges from the fact that little ones (and some not so little ones) are no longer allowed to sit on Santa’s knee in the grotto, to the knowledge that some of our traditions both ancient and recent (if you do something twice it is a tradition) will have to be done very differently. Of course it won’t be the same. How could it be? And of course there will be much to miss and indeed lament however…

Even as I write the much reduced cast are preparing for ‘Not the Exeter Nativity’. This will be nothing like the Exeter Nativity of previous years with llamas (or was it alpacas?) disguised as camels and everyone turning up in their own special costume to be one of the characters – and here we take a moment to offer thanks for those who have endured all the stress and exhaustion of creating that wonderful event in past years. Brace yourself for next year!

This event will indeed be different from what we have allowed ourselves to think of as ‘normal’ – perhaps ‘usual’ would be a better word.  As one of this year’s cast pointed out, they have never seen a Nativity Play with Mary peeling potatoes on stage chatting to a shepherd called Graham and one person playing seven parts – sometimes several at once.

We have become accustomed – it has become ‘usual’ – to think in terms of huge numbers passing through the Cathedral for Carols at Lunchtime, or the Grandisson service, or Midnight Mass, or indeed the Exeter Nativity. I, for one, have loved it all and will miss it all. However, one of the lessons that being asked to do things very differently has to offer is; if we spend our time lamenting what cannot be and approach what we can do half-heartedly we will never discover the joy of the possible. What can we do? How well can we do it? What extra effort can we make to ensure that others can rejoice in what is rather than only missing what isn’t. Sometimes it takes an effort to find a different way of seeing things.

The little person who commented on having to keep a distance from Santa confided that this was O.K. because she didn’t like sitting on a stranger’s knee anyway. (It must have been a good costume because the Santa was her Dad!) The person who did like sitting on Santa’s knee discovered that, at twenty seven, she probably had outgrown the experience. The Cathedral volunteer who in previous years worked themselves into the ground said, ‘This year I might not be exhausted for all of January’. One person, who lives alone and has been accustomed to inviting friends for Christmas lunch, confided. ‘I will spend most of Christmas day on the phone toasting all the friends I cannot meet. I expect to be quite jolly by teatime.’

Perhaps this year, if I am not so busy, I will have more space for the awe and wonder of it all. Perhaps next year, if what is ‘usual’ resumes, I might try to remember what I learned during a Christmas that was decidedly unusual.