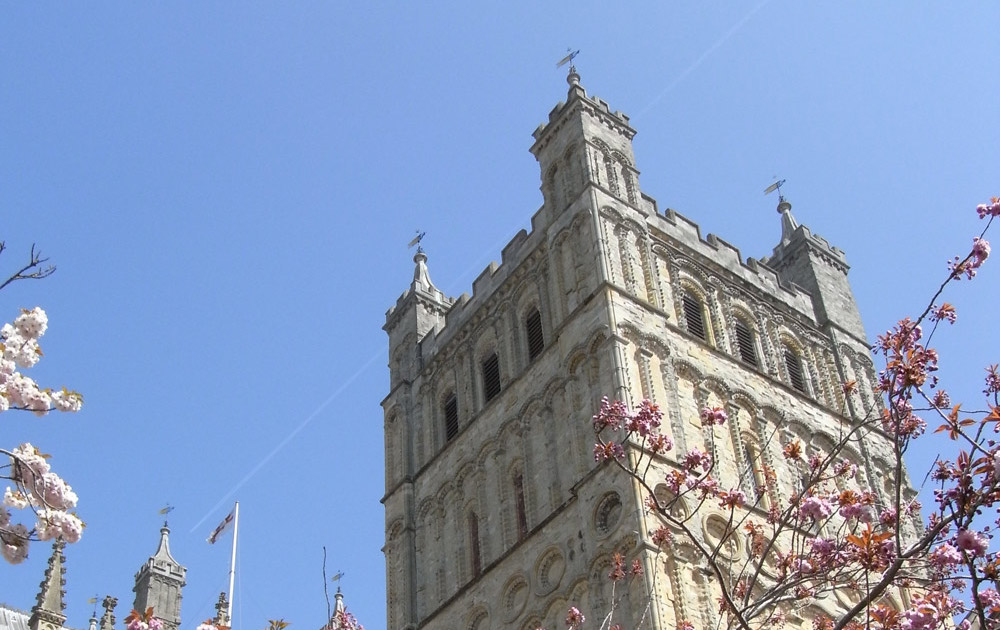 The latest phase of Exeter Cathedral’s annual high-level inspection gets underway today (Monday 16th March 2018), as part of an ongoing programme to monitor the condition of the ancient and iconic Norman towers.

Taking a closer look at the stonework, some of which dates back to the 12thcentury, is an essential part of the conservation and restoration process, as Chris Sampson (the Cathedral’s Clerk of Works) explains:

“This kind of examination, carried out by steeplejacks using specialist equipment, allows us to record the state of the towers and to compare the findings with last year’s work to track any deterioration.

“A small amount of restorative work can also be carried out from the rope, whilst any more serious repairs will then be stabilised and incorporated into our ongoing major works programme.”

Western Steeplejacks have been contracted to carry out the inspection, which will take in the weather vanes, louvres and masonry on the south tower, including its Cloister elevations. Parts of the Cloister Garden will be fenced-off for the duration of the work, which is set to much of the week, but access to the Cathedral and the Cathedral Café will be unaffected.

Exeter Cathedral’s towers were built between 1114 and 1133 as part of the Norman Cathedral, and later incorporated as transepts during the construction of the present Cathedral between c.1270 and 1350. The south tower houses 14 bells, the second heaviest peal in the world.

High up in the north tower is the ancient Peter Bell, which can be heard striking every hour, controlled by the clock mechanism below. The upper levels of the south tower contain the ringing chamber and the bell chamber. The 14 bells housed here form the...

Norman Towers
Conservation of the Cathedral

There are fourteen bells hung for ringing in the south tower, including a tenor of 72 cwt. (over 3.5 tons), which makes them the second heaviest peal in the world, after Liverpool Cathedral. The South Tower The bells themselves have a very long history,...