It was twenty years since the Norman Conquest. William the Conqueror faced external enemies and his capacity to tax his new kingdom sustained his political and military endeavours. Land was the main source of wealth, and the tax was called ‘geld’. The assessment was heavy, six shillings (72 pence) for each of the 10,316 taxable units of land called ‘hides’ recorded in south-west England. Predictably enough, the burden was unequally shared: 32.8% of the hides were exempt because they were farmed directly by the king and his barons, but English peasants and Norman knights had to pay in full. The king’s sheriffs were responsible for collecting the revenues from their shires. Under them were local collectors working in each of the hundreds, the lowest tier of local government. They had English names and an English job description: ‘fegadri’ in Latin, from the Old English words meaning ‘wealth’ and ‘gatherer’. Specially appointed tax-bearers, themselves Norman barons, transported the thousands of silver pennies raised in each shire to the king’s treasury at Winchester, and claimed expenses for hiring horses and a scribe and buying leather bags and sealing-wax. 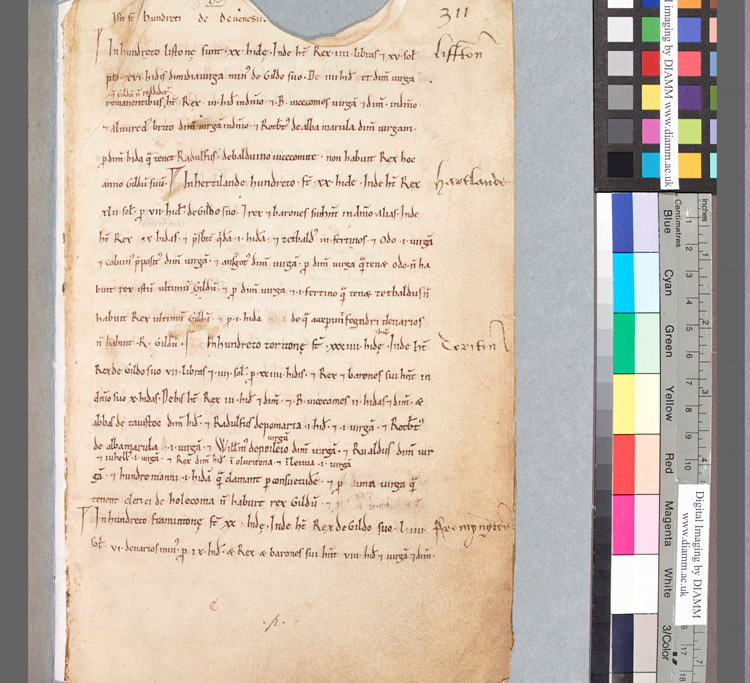 There are two main forms of evidence for the mighty fiscal apparatus of the eleventh-century English state. One is the sophistication of the coinage system, whose remnants survive in bulk. The other is the unique tax records or ‘geld accounts’ which survive in Exeter’s manuscript of Domesday Book, known as Exon Domesday. They were copied directly from the working accounts kept in the treasury, and list exemptions, sums paid, sums still owing, and sometimes the steps taken to collect arrears. Without them we would know almost nothing about a remarkable system of early taxation in England, which raised more than 400,000 pennies from the south-western shires in the 1086 tax year.

For an Exeter penny of William the Conqueror see here.