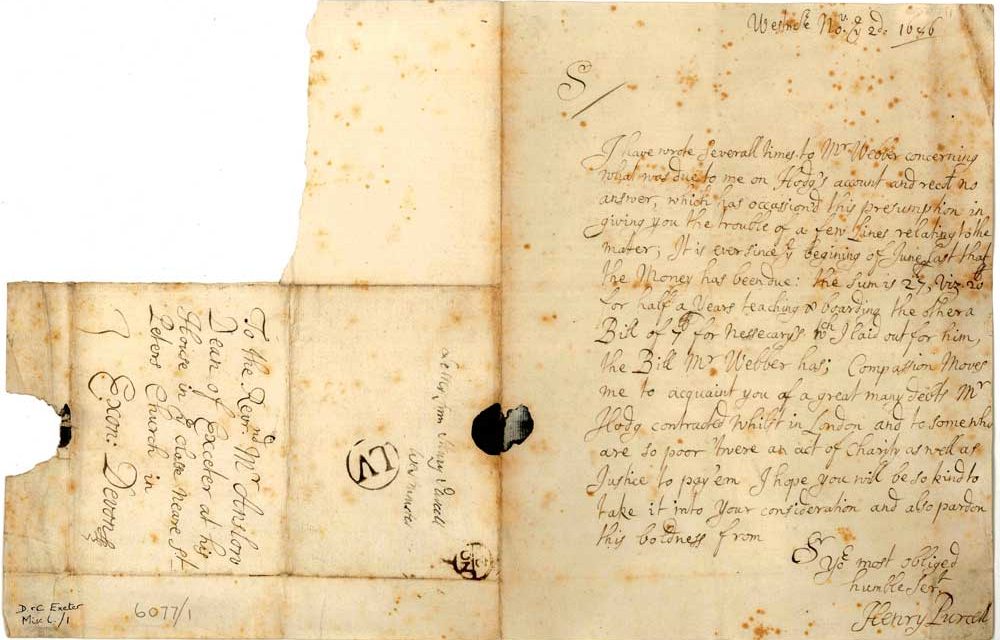 It is believed to be the only remaining handwritten letter still in existence from one of England’s greatest composers, Henry Purcell, but rather than being on the subject for which he is rightly so famous today, it is a much more commonplace demand for cash.

The famous 17th century composer Henry Purcell lived and worked in London but taught choristers sent up to him from Exeter Cathedral School.

The Cathedral was due to pay tuition fees and board for the choristers but Mr Purcell complains – very graciously – that the bill for one of them, Richard Hodge, has not been paid despite two or three previous letters requesting payment.

In this handwritten letter, dated 2 November 1686, Mr Purcell says he has been forced to appeal to the Dean of the Cathedral, the Honourable Richard Annesley, who Purcell calls Anslow.

The bill was for £27 for tuition and board of Mr Hodge, and £7 for other necessaries. Mr Purcell also tells the Dean that “compassion moves me to acquaint you of a great many debts Mr Hodge contracted whilst in London and to some who are so poor ’twere an act of Charity as well as Justice to pay ’em.”

The Purcell letter is part of the Archives of Exeter Cathedral, which contains thousands of records covering all aspects of life at the cathedral – musical and otherwise – including the most complete set of medieval Fabric Accounts of any Cathedral.

She said: “In 1683 the Dean & Chapter’s minute books record that Hodge was sent “to go to London to learn organ and composition from Dr [John] Blow ‘or some other person of the King’s Chapel’. To have £20 for teaching costs, £5 for journey and clothes and £12 salary for maintenance”. He ‘deserted the quire’ in 1688 having more than once been admonished for such behaviour as ‘going about the town in the night time with idle company with music’. His brother took his place, but sadly did not perform much better.”

She added: “I’ve always thought rather well of Purcell because of this letter, showing he thought about debts to others too.”

Happily the Dean and Chapter did pay the overdue bill in the end, she added.