While working on the conservation of a 19th century memorial, Exeter Cathedral stonemasons Matthew Hoskins and Anna Steinmetzer have made an important discovery from a much earlier period in the Cathedral’s life.

The removal of the memorial for cleaning has revealed a decorative wall scheme that has helped historians to complete a fascinating picture of how the Cathedral would have looked in the Norman period. As Anna explains:

“This decorative scheme matches others previously seen in the south tower and the south nave aisle of the Cathedral. It comprises a white limewash with red ochre lines, applied to imitate ashlar blocks.” 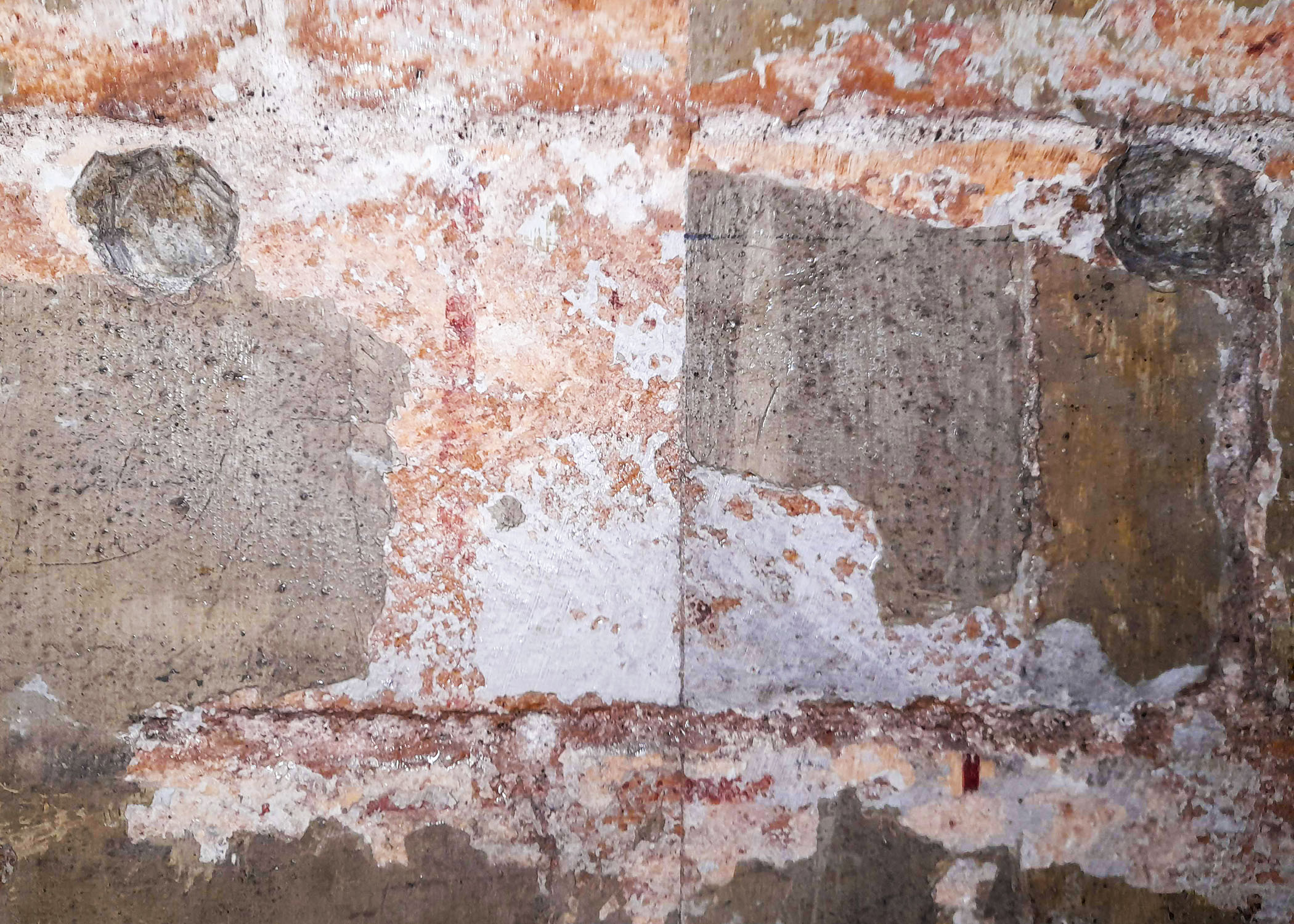 Above: detail of the Norman scheme

The memorial, which had suffered damage caused by its original iron fixings, has now been carefully cleaned, waxed and reassembled using stainless steel fixings to prevent future damage.

Dedicated to a former Chancellor of the Cathedral, The Reverend Nutcombe Nutcombe, in 1809, and to his wife Anne in 1811, the monument is much loved for the Chancellor’s unusual name. 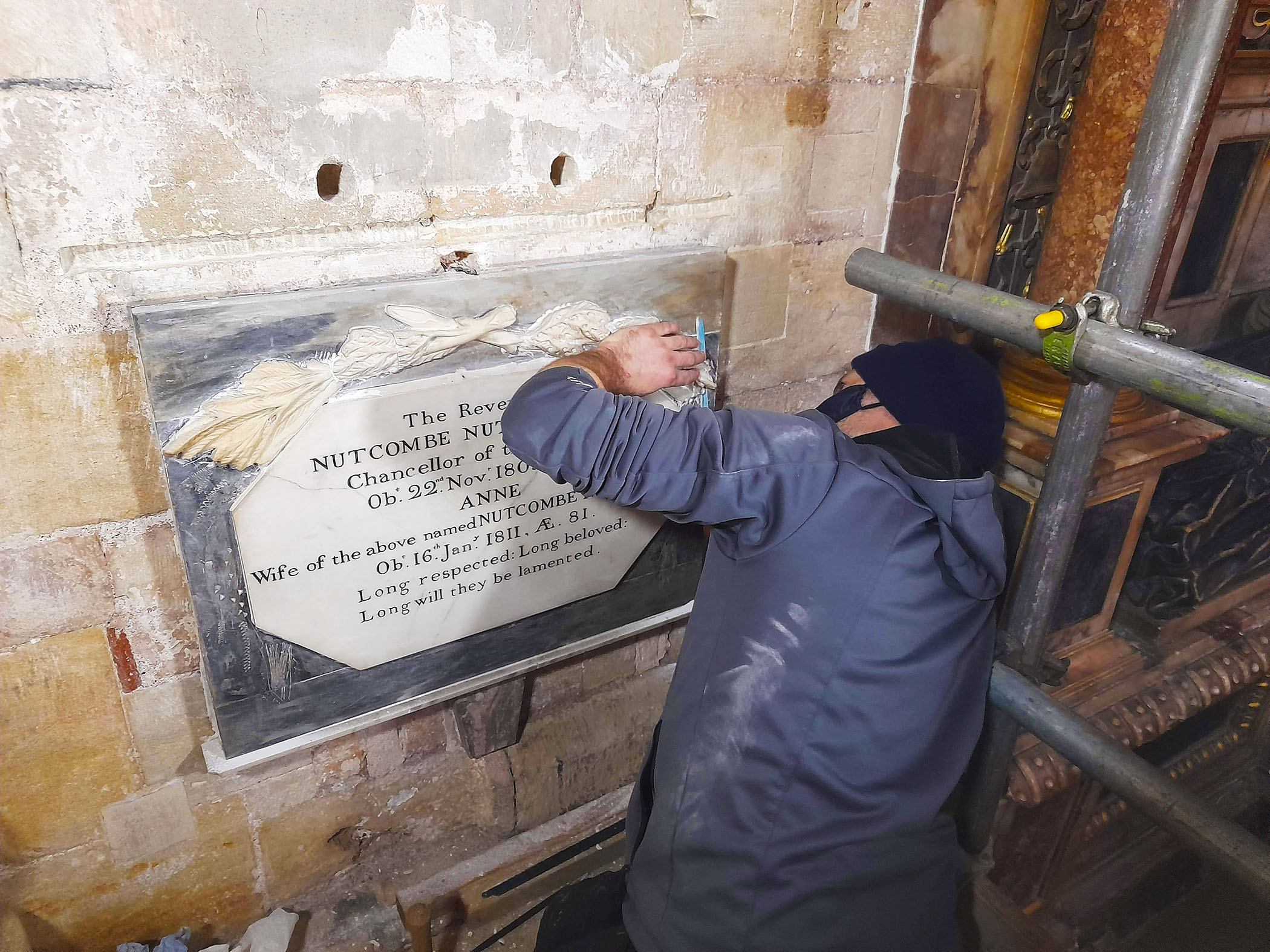 Nutcombe Nutcombe has been a particular topic of interest for Exeter Cathedral’s current Chancellor, the Revd Canon Chris Palmer:

“As he’s one of my predecessors, I became fascinated by his story and particularly his name.”

“Nutcombe started out life as Nutcombe Quick, the second son of John Quicke and Rebecca Nutcombe. He seems to have been given his mother’s maiden name as a Christian name in the hope of inheriting her family’s wealth.”

“Evidently, he did indeed inherit the wealth, and changed his surname by deed poll to Nutcombe to perpetuate that family name. He’s surrounded by family in the Cathedral – there are nearby memorials to his father-in-law, Right Reverend George Lavington, Bishop of Exeter, and to his son, Reverend George Nutcombe.”

The stonemason’s work on Revd Nutcombe Nutcombe’s memorial is part of a wider internal repairs programme currently underway, covering a number of Exeter Cathedral’s many intricately-carved monuments. The programme has been funded by a £24,000 grant from the Emergency Heritage at Risk Response Fund – part of the government’s Culture Recovery Fund administered by Historic England – as well as additional support from the Friends of Exeter Cathedral charity.

“Historic places across the country are being supported by the government’s grants awarded under the Culture Recovery Fund. This funding is a lifeline which is kick-starting essential repairs and maintenance at many of our most precious historic sites, so they can begin to recover from the damaging effects of COVID-19.”

“It is also providing employment for skilled craft workers who help keep historic places alive and the wheels of the heritage sector turning. Our shared heritage is an anchor for us all in these challenging times and this funding will help to ensure it remains part of our collective future.”

The Reverend Nutcombe Nutcombe’s deed poll can be found online at: