Driven by Fear or Drawn by Delight? 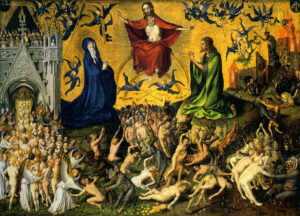 There is an old hymn which I love to quote simply because it is the antithesis of what I believe to be true.

“The world is very evil, the times are waxing late, Be sober and keep vigil, the judge is at the gate.”

The hymn appears to tell us that the Christian hope is all about what happens when we die and that this life is all about being good enough to get to heaven and also that this world is just here to trip us up.

Those of you who know the hymn will tell me I am not being entirely fair. I know but my summary is very close to the truth. The contrast is between being driven to heaven for fear of hell against being ‘drawn by delight’ and the love and delight that draws us heavenward is to be found in the here and now. The world is not inherently evil. This world and the dimension we inhabit, that strange elastic thing we call time, is the arena in which God acts. It is, as Teilhard de Chardin wrote, Le Milieu Divin.

It doesn’t look much like it at the moment though, does it? A worldwide pandemic. Politics of fear and hatred in places we never thought to see such a thing. A new version of the old cold war hovering around the edges of awareness. Economies on a knife edge. I’d better not say anything about our own politics. There are those who get very twitchy when clergy have the temerity to apply the Gospel to such areas of life. It does make me wonder sometimes, if we don’t want God in our politics, what other parts of our life would we rather he stayed out of? I digress. You might be forgiven for thinking that the world as it is today does not look much like Le Milieu Divin. That all depends on where you are looking and mostly we look for things we think are the symptoms of the presence of God, a world of peace and plenty, lush and green, where God can be found in beauty all around us. Of course, when we see beauty in the world we can see a glimpse of divine glory. The difficult part is seeing God in the harsh and the unlovely places so we don’t look there. Father Thomas Keating (of centering prayer fame) told an engaging little story about an Indian Guru and his disciples. One day they arrived to find their master grubbing around in the grass at the front of his house. ‘Master, what are you doing?’ He replied, ‘I am looking for my key’. Most of them dutifully started looking between each blade of grass, all except one. The one said, ‘Master, where did you lose your key? The guru said, ‘In the house’. ‘Then why are you looking out here?’ ‘The light is better out here’.

If we look where it is easy to see, we shall very likely miss what God is up to very close to us, in the shadows. Gerard Manley Hopkins tell us the, ‘The world is charged with the grandeur of God’ So it is but where to look in this strange time? Malcolm Guite’s poem for Easter this year gives a hint, a starting place. It has lodged in my heart and mind, so I share it with you although Easter is long past – well, we are an Easter people are we not?

And where is Jesus, this strange Easter day?

Not lost in our locked churches, anymore

Than he was sealed in that dark sepulchre.

The locks are loosed; the stone is rolled away,

And he is up and risen, long before,

Alive, at large, and making his strong way

Into the world he gave his life to save,

No need to seek him in his empty grave.

He might have been a wafer in the hands

Of priests this day, or music from the lips

Of red-robed choristers, instead he slips

Away from church, shakes off our linen bands

To don his apron with a nurse: he grips

And lifts a stretcher, soothes with gentle hands

The frail flesh of the dying, gives them hope,

Breathes with the breathless, lends them strength to cope.

On Thursday we applauded, for he came

And served us in a thousand names and faces

Of that virus which was death to him:

Where Jesus held the helpless, died with them

Now they are risen with him, risen indeed.