Anthropology: A Mirror to Better Understanding

Anthro-Vision: How Anthropology Can Explain Business and Life 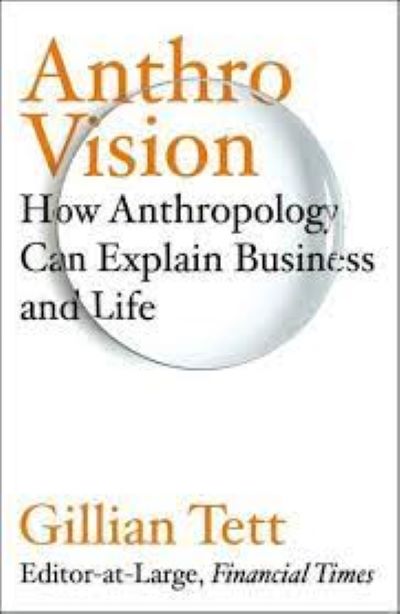 We live in a world of constant noise, complexity and diversity. It can be confusing and hard to understand ourselves, never mind those from different cultures.

This book argues that anthropology can help to explain those who are different and act as a mirror to better understand ourselves. It focuses on how social groups function and brings a broad perspective to seeing patterns of behaviours and naming the social silences.

Gillian Tett is an anthropologist by training who, some thirty years ago, became a journalist with the Financial Times. The transferrable skill of curiosity has done her well as she interprets the behaviours of bankers and financial markets.

Her main point is that to better understand the world you need to combine a broad view of the social processes that occur with scientific approaches. A good example is where she writes about a study of the emergence of a ‘mask culture’ during the pandemic. Masks help reduce contagion, not just because of hard science, but also because the ritual of putting on a mask is a powerful reminder of the need to modify behaviour. ‘Masks are a symbol that demonstrates adherence to civic norms and community support.’

The book is divided into three sections. The first tells stories about making the ‘strange’ familiar. We often shy away from cultures and people that seem ‘strange’ to us. Anthro-vision offers the chance to embrace the strange and the associated culture shock. Anthropologists use tools such as ethnography where time is spent listening and observing. We often think of anthropologists going off to study some long-lost tribe in an exotic country. The author did her PhD based on the marriage rituals of people in Tajikstan. Such immersive observation methods are increasingly being applied in business and policy contexts.

Part two is about making the ‘familiar’ seem strange. There is a wonderful quote by Anais Nin, ‘What we are familiar with we cease to see.’ Put another way – a fish does not see water. Being an FT journalist gives Tett plenty of opportunity to observe bankers in action. She observed, before the financial crash, a game being played, covered in acronyms, to divide up financial risks in such a way that no one could understand or regulate the system. We who live in the affluent UK don’t see ourselves as anything but normal. Yet it is argued that our society is an outlier in the wider world as ‘people tend to be highly individualistic, self-obsessed, control-orientated, nonconformist and analytical… and see ourselves as unique beings… and prefer a sense of control and making our own choices.’ These traits are described as WEIRD: Western, Educated, Individualistic, Rich, and Democratic.

The final section delves into social silence – our blind spots. We are ‘prone to lazy assumptions and biases’ as we are products of our social, cultural and physical patterns. How do we make sense of the world? It turns out that working from home suits some industries but for many being together in the office allows the informal ‘sense-making’ processes to take place and better outcomes to be achieved.

The pandemic has forced us to retreat to the safety of our own group and look inward. Tett argues that this is the time to widen our lens on the world. Be an outsider, actively listen to the silences, observe the rituals and symbols that give meaning. There is no single explanation of human existence: it is a tale of diversity. Anthro-vision helps us to see and better understand that diversity and be empathetic to that which we see as ‘strange’.

As a journalist Tett is an accomplished writer and storyteller. This book is an easy and delightful read if you wish to gain a different yet important insight into our fascinating social world.