‘All We Require is the Will’ 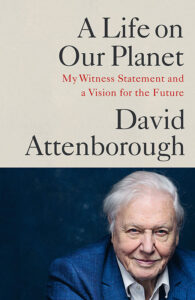 David Attenborough
A Life on Our Planet

At 94 years old David Attenborough ranks alongside the Queen in the eyes of many as one of our national treasures. In his ‘witness statement’ he reflects on his life and the spiralling decline of the planet’s wild places, and its biodiversity. With his own deep knowledge and that of the World Wildlife Fund (WWF), he sets out a vision for the future, plotting a path towards recovery.

Born in a very different era – when the global population was just over two billion, over two thirds of the wilderness remained and carbon in the atmosphere was nothing to worry about. His career started with the BBC in 1954 as a producer of non-fiction films. Almost by accident he ended up in front of the camera, pioneering adventures into the wilderness to film the animals in rain forests, African plains and then the seas of the world. At the beginning he went on Zoo Quests expeditions, filming and finding animals to bring back to London Zoo.

He took charge of the new BBC 2 in 1968 as colour TV was just starting. In that role he commissioned a new format of one hour documentary programmes. This led to the Life on Earth series of 13 films featuring over 600 animal species across some 30 countries, transmitted in 1979. Nature programmes have not looked back since then.

Powerful statistics are presented at the start of each chapter in the first half of the book. World population climbs, carbon in the atmosphere rises and the remaining wilderness shrinks. In 1954, 66% of the wilderness remained, in 1989 it was 49% and in 2020 it was 35%. Attenborough writes: ‘Our blind assault on the planet is changing the very fundamentals of the living world.’ Whether on land or sea humans have impacted as never before. We have moved from the Holocene period where nature was in a state of balance to what is now termed the Anthropocene – the period during which human activity has been the dominant influence on climate and the environment. Many suggest this period started in the 1950s, but was only recognised in the last few years.

The book pivots after the witness statement providing a vision for the future. Using knowledge from the WWF, earth science and economics, the suggestion is that ‘sustainability in all things’ has to be our philosophy as a species. A ‘Doughnut Model’ is to be our compass (see Kate Raworth ‘Doughnut Economics’). This model has the outer ring showing nine planetary boundaries including climate change, air pollution, biodiversity loss and chemical pollution. Some of those boundaries have already been breached. The internal ring recognises that many people in our world still live in poverty, lack clean water, sufficient food or a political voice. A review estimates that 50% of humanity’s impact on the living world is attributable to the richest 16%. The lifestyle of the wealthiest is unsustainable.

The challenge is simple, says Attenborough: ‘to improve the lives of people everywhere, while at the same time radically reducing our impact on the world.’

New Zealand is praised for moving beyond the dogma of seeking constant growth as measured by Gross Domestic Product (GDP). Markets have to benefit not just profits, but also people and the planet – the Three Ps. Specific proposals for the future include moving to clean energy, rewilding the land and seas, reducing the space used for agriculture, and taking action to educate women and thereby bring forward the time when we will reach peak human population.

The book starts and finishes at Chernobyl nuclear power plant. At the start it is used as a warning of how many interacting parts create high risk situations that can slip beyond our control. At the end it is a sign of hope. Humans being banned from the area has allowed nature to recover and animals to return.

‘We can yet make amends, manage our impact, change the direction of our development and once again become a species in harmony with nature. All we require is the will.’