A Miscellany of Views

Some of you may have listened to the BBC Radio 4 programme Round Britain Quiz. The contestants, made up of regional teams from around the country, are asked to pull together a group of rather random clues that all have some common connection which is not always obvious when the question is first asked. Unlike TV quizzes there can’t be a picture round. But I will remedy that this week and ask the question: what or who connects these pictures?

On a recent trip to Scotland I crossed the Firth of Forth to enter the Kingdome of Fife. I used the new road bridge, but I expect some of you have crossed on the amazing rail bridge which was opened in 1890 and for over 130 years has connected the Scottish East Coast Line.

On my travels that day I wanted to get as close as I could to the rail bridge so I went to the small town of North Queensferry. I walked down the very blustery pier which was where the ferries docked from mediaeval times until the advent of the first rail and road bridges, this being the only way for the public to cross the Firth of Forth.

Reading my guide book I found that Queen Margaret, wife of King Duncan III, commissioned the ferry to allow pilgrims to make their way from the Scottish Boarders to St Andrew’s Abbey where the relics of St Andrew the Apostle were housed in a shrine.

I then visited Dunfermline to see the remains of the old Abbey and Abbey Church, which now serves the local worshipping community of the town. It was there that I discovered that Queen Margaret, now St Margaret of Scotland, was buried and until the Reformation it too was a place of pilgrimage.

So, St Margret of Scotland is the person who links my four pictures. 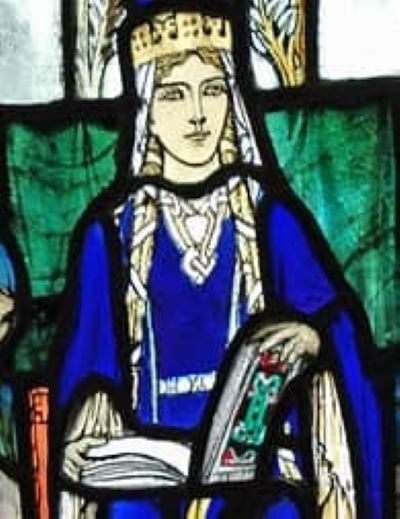 Our knowledge of Margaret is quite extensive because her biography was written by Turgot of Durham, who became the Bishop of St Andrew’s.

Margaret was born in about 1045 in Hungary. Her father, the English Prince Edward, was in exile. Her mother was Agatha, the granddaughter of King Edmund Ironside of England. The family returned to England in 1057 when Edward the Confessor was on the throne. Margaret was then known as Margaret of Wessex and was an English princess. When King Harold II died at the Battle of Hastings in 1066, Margaret’s brother Edgar was proclaimed king of England but was never crowned because William Duke of Normandy took the throne. Because of this Margaret and her family fled to Northumbria for safety. Subsequently, Margaret married Malcolm III of Scotland in 1070 who was a widower.

Margaret was a very pious woman and was known for her many charitable works, including her care of orphans and the poor, and establishing two ferry crossings over the Firth of Forth (North Berwick and Queensferry) for pilgrims travelling to St Andrews Abbey in Fife where the relics of St Andrew could be venerated. She also invited the Benedictine Order to establish a monastery in Dunfermline in 1072. She had an important influence on her husband, King Malcolm, to whom she read the scriptures and shared her own discipleship of Christ. Margaret brought about many reforms in the Church of Scotland with the guidance of Lanfranc, who later became the Archbishop of Canterbury. Because of personal witness she was recognised as an exemplar of ‘a just ruler’ having influenced her husband and brought up eight children in the Christian faith. She gave birth to three future Kings of Scotland: Edgar, Alexander I and David I. At the age of just 49 Margaret died on the 16 November 1093.

It was Pope Innocent IV in 1250 who canonised her and her remains were reinterred in a shrine in Dunfermline Abbey. Her feast day in the Anglican Calendar is 16 November and she is held to be the patron saint of those who serve the poor.