The NHS turns 70 on the 5th July. Canon Mike Williams writes with some thoughts ahead of this anniversary

Some say the NHS is the nearest thing that we have in this country to a religion – we all believe in the NHS. Politicians mess with the concept of ‘free at the point of use’ at their peril. There was considerable opposition to the establishment of a state-run health service from the medical profession back in 1948; yet the public signed up in their millions. The thought was that once the health of the nation improved, the costs of the service would reduce! Recent pressures on the NHS show that our lifestyle choices, increased population and living longer means that we struggle to find the resources in people and money to keep up with demand.

The provision of NHS services is only one part of a complex jigsaw of welfare provision in this country. Recent announcements on funding for the NHS recognise that it is under pressure and letting patients down. Yet the connection with social care and wider social policy is critical to ensure that people are cared for in the most appropriate environment. Most local authorities have seen very large reductions in their budgets over the last eight years – we see the consequences in our prisons, on our streets, care homes and hospital wards.

Jesus lived under Roman occupation. He healed the sick and preached a message of love and compassion towards those in need. He supported paying taxes to the Roman Emperor. His disciples held their possessions in common and provided for others. The ideal of communal living at state level does not have a rosy history. Sharing our resources through taxation seems a fair way to help those in our society in need of care, and to provide services that we all benefit from. Yet tax collectors remain as unpopular as they were in Jesus’ time.

As society has become more individualistic the political mood has changed. Promising to raise taxes does not win elections, is the perceived wisdom. Cuts in services are preferred to asking us to pay more. Being the good Samaritan today means the same as the story we read in the Gospels – to notice the need of the stranger, and be willing to pay for the costs of care and compassion in our society. 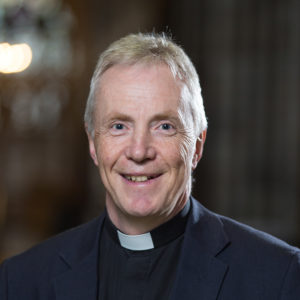 Mike joined Chapter in November 2016 as a self-supporting residentiary Canon.

He served as a Royal Marine officer before joining the NHS. He has been a Chief Executive of NHS hospitals in Oxford and Taunton and as a Non-Executive in Plymouth Hospitals.

Most recently he has been a Senior Research Fellow at the University of Exeter Business School.

He was ordained Priest in 1993 after training at Ripon College, Cuddesdon and served as both stipendiary and self-supporting in parishes in Oxfordshire and Devon.

After serving as a Residentiary Canon he was installed as Canon Treasurer on Palm Sunday 2018.