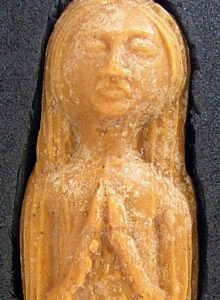 On 15 July 2020 Exeter Cathedral will be commemorating the 600th Anniversary of Edmund Lacy being announced as Bishop of Exeter, and a short service will be live on Facebook from 10am.

Had it not been for the reformation when all shrines were destroyed it is said that Exeter might have had a Saint Edmund.

Bishop Lacy (c1370 – 1455) was much revered in his lifetime and after. He took a lively interest in the daily worship of the Cathedral where he was particularly interested in the music. He travelled widely within his diocese until a disease of the shin bones eventually caused him to stop riding.

He died in 1455, aged about 85, having served his diocese and cathedral for 35 years His reputation for blessedness continued even after his death. For many years pilgrims came to his tomb to pray and seek his blessing. They left votive figures of human and animal parts.

Over a thousand fragments were found in 1943 during the inspection of the Cathedral for war damage following the bombing in 1942.

These beeswax fragments are too fragile to be put on display, so working with the Exeter University Digital Humanities department, the nine largest fragments have been photographed and will be available as 3D models in the future.

A small cabinet has been commissioned to house the models and this is now situated by the side of Bishop Lacy’s tomb in the north quire aisle of the Cathedral. Just one model has been completed so far –  that of a woman praying. To coincide with Bishop Lacy’s anniversary, she will be on display from 15 July.

Follow the link below for more information about these very rare and only votive figures remaining in England, and possibly northern Europe, together with the work which has been done to make them available for all to see.