The Man Behind Keynesian Economic Theory

The Price of Peace: Money, Democracy and the Life of John Maynard Keynes 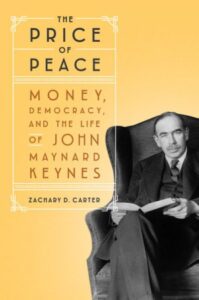 The financial crash of 2008 provoked a renewed interest in Keynesian economic theories, advocating that governments run deficit budgets to avoid major recessions. Books written then are now being read avidly once again by policy makers as they grapple with the economic impact of the pandemic.

This book is one of the best in providing a rounded picture of the man behind the economic theory. It is biography combined with social, political and economic history.

Keynes is remembered as an economist, but he had a wider vision born of experiencing world wars and a radical optimism of what it takes to establish peace. He was a complicated man with a place at the heart of the Bloomsbury set, a group of international progressive intellectuals. A Cambridge don, he rushed on a motorbike to the aid of the government during the financial crisis of August 1914 as Europe slid towards war.

Carter is a journalist who weaves together insights from letters, newspaper articles and academic publications by Keynes to demonstrate the breadth and depth of the man and his ideas. He shines a light on his love life with men, then how he fell in love at the age of 35 with Lydia Lopokova, a celebrated Russian ballerina, whom he married in 1925.

Although an academic and a senior advisor to government, Keynes made a fortune in the money markets and was a prolific writer for newspapers. He became the celebrity economist who governments turned to, even though he was not afraid of being critical. He saw the potential consequences of the peace treaty that followed the First World War, arguing that insisting on debt repayment would create the conditions for authoritarian rule.

Tracing the evolution of Keynes’s economic theory is central to the book. In his famous essay on the ‘Economic Possibilities for our Grandchildren’ he predicted that in 100 years the standard of living would rise so much that the working week would be reduced to fifteen hours. Although he had a vision for a fairer and more prosperous world, he failed to see that our wants are far greater than our needs and the ‘love of money’ would create a loss of shared responsibility and community.

Keynes served his country again during the Second World War and was a key figure in the Bretton Woods post-war agreement, despite his failing health. He died in his early sixties in 1946 and the criticism of his theories began within a short time. Particularly in America he was seen as being from the left and, in the time of McCarthyist witch-hunts, he fell out of favour.

Carter explores the demise of Keynesian macro-economics as it failed to curb inflation and was overtaken by the rise of a more fundamental free-market approach advocated by Hayek and Friedman. Ronald Reagan, a strong supporter of the Hayek doctrine, ironically ran up record deficits as he cut taxes and outspent the Soviets on the military.

The book concludes with the events of 2008 and the decisions to allow Lehman Brothers bank to fail, sparking a huge financial meltdown and subsequent bank rescues by governments around the world. Today governments have committed far greater sums to prop up public services and the economic lives of citizens. Perhaps one of the lessons from Keynes is his radical optimism in a better future. Keynes worried that without optimism and action to alter the economic damage of war, financial meltdown or even a pandemic, there is the prospect of a frightening global slide into authoritarianism.

This is a long book but worth the effort to really understand Keynes, his context and the importance of his contribution during his lifetime and beyond. For those who want a shorter book focused more on the economics, then try Robert Skidelsky’s ‘Keynes: The Return of the Master’ or ‘Money and Government’ or, for a lot more detail, look at Skidelsky’s three volume biography of Keynes.