A special ceremony will take place at Exeter Cathedral on Sunday, to commemorate the heroic Second World War defence of Exeter by a Polish night-fighter squadron.

Poland’s 307 Squadron was based at RAF Clyst Honiton — now the site of Exeter Airport — between 1941 and 1943, to defend the South West against night attacks by enemy bombers. On the main night of the Exeter Blitz, the squadron — heavily outnumbered with just four available aircraft to tackle 40 enemy planes — shot down four German bombers which were primed to release their bombs on Exeter, potentially preventing total destruction of the city.

This year’s ceremony at Exeter Cathedral is especially significant because it marks the 80th anniversary of the formation of 307 Squadron. It will also be the first time that representatives and congregations are unable to physically attend the service, due to Covid-19 regulations. 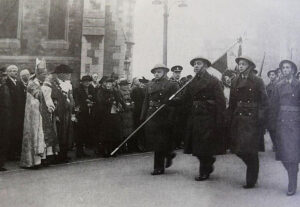 On 15th November 1942, to demonstrate the friendship that had developed between the squadron and Exeter, 307 Squadron presented the city with their national flag, the first British city to have ever received the Polish colours. The presentation, which took place outside the West Front of Exeter Cathedral, was attended by clergy of the Cathedral including the Bishop of Exeter, the Mayor of Exeter and approximately 400 members of 307 Squadron. (Top photo: courtesy of Janina Struk)

The ceremony will be led by the Cathedral’s Canon Precentor, the Revd Canon James Mustard, who hopes that this year’s unprecedented circumstances may result in more people becoming aware of the region’s debt to Poland:

“It is a huge privilege and utterly humbling to play a role in remembering the critical wartime contribution of our Polish friends, so we are of course disappointed not to be able to host the ceremony in the usual way, due to current lockdown restrictions.”

“However, by filming the ceremony and sharing it on social media, we hope that on this significant anniversary year we will be able to express Exeter’s enduring gratitude to those in Poland and around the world, who may share a connection with 307 Squadron.” 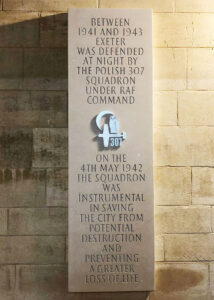 Exeter Cathedral’s wreath-laying ceremony will be just one of a number of online events on Sunday organised by the 307 Squadron Project, a British-Polish charity set up to promote and research the role of the squadron. Charity trustee Michael Parrott has also turned to social media to ensure the squadron’s 80th anniversary is remembered:

“In spite of the global pandemic, we’re determined to continue remembering the actions of this incredible group of young men from Poland.”

“We’ve organised a full schedule of events for Sunday called 307 Squadron Day Live – all of which can be viewed in safety on our Facebook page. As well as enabling us to commemorate 307 Squadron in lockdown, we hope that social media will provide a platform for new generations to hear this important story.”

307 Squadron Day Live will begin at 9:45am with a ceremonial raising of the Polish flag at Exeter Guildhall, including speeches from the Polish Ambassador to Great Britain, the Mayor of Exeter, and Lord Lieutenant of Devon. A special 80th anniversary film telling the story of 307 Squadron will then accompany footage of Exeter Cathedral’s ceremony at 4pm, followed by performances by British-Polish singer Katy Carr and a trailer of The Navigator – another film produced by the 307 Squadron Project.