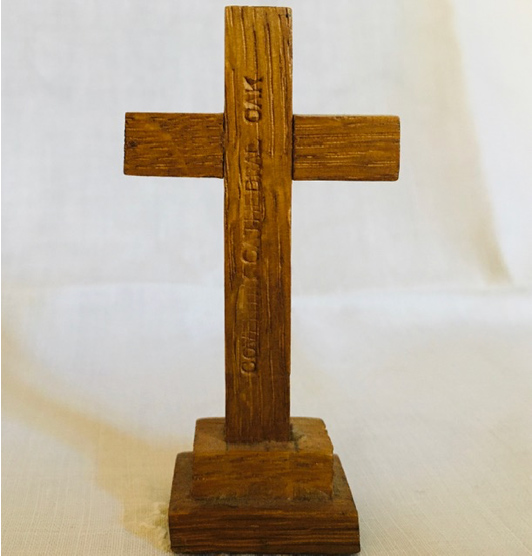 One of my prize possessions is a tiny wooden cross, not even three inches tall, and made from ‘Coventry Cathedral Oak’. These words are imprinted on the upright beam of the cross. It was made from oak rescued from the wreck of the bombed out Coventry Cathedral, after it was destroyed in the Coventry blitz in November 1940. Thousands of these crosses were made. They were sold to raise money to build a new cathedral. It’s in that new cathedral that I was ordained over 20 years ago.

I was given this cross by an elderly lady when I was a curate. She had bought a dozen or more after the war and had been giving them out slowly over the years. This was the last one she had to give away.

This Sunday is Passion Sunday, the start of two weeks in which we enter more intensely into the suffering of Christ, leading to the joy and hope of Easter Day. And the cross is a sign of Christ’s passion. On the cross Jesus suffered terribly; on the cross he died. It speaks of Jesus sharing in the trauma of human living.

The trauma of the cross, the trauma of the blitz, and the trauma of the Coronavirus crisis are all very different. But they are also the same – they strip away so much of what we rely on for hope. We are all less free than a couple of weeks ago; many people are without work; other people have too much work, and some of it dangerous; lots of people are lonely because of self-isolation; some people are ill; and some have lost their lives.

Freedom, work, safety, company, health, and life itself. What meaning is left when these might disappear? But on the cross, Jesus lost all of these – became an irrelevant statistic; actually they probably weren’t even counting, so not even that.

But from the wreckage of despair and loss, God’s resurrection life arises. Indeed it’s only from the wreckage that new life comes. Only when we loosen our grip on all the rival things we rely on for meaning do we discover a love that is holding us and will never let us go.

I want to say that this may not be a quick journey. Some of the great saints had to face the night for a long time, before they began to see anything in the dark. So, St John of the Cross, in the sixteenth century, was locked up in brutal imprisonment for eight months, and for a long time saw only despair. But gradually towards the end of this time, by losing everything else, he was able mysteriously to encounter the love of God that longed for him. He wrote one of the most famous poems of the modern era, ‘The Dark Night’.

O guiding night!
O night more lovely than the dawn!
O night that has united
the Lover with his beloved,
transforming the beloved in her Lover.

The night is after all good, because it guides us to union with God.

As we live with lockdown, as we face uncertainty, as we enter Jesus’s passion, may we relinquish ourselves to the night, because there – and nowhere else – God will find us.