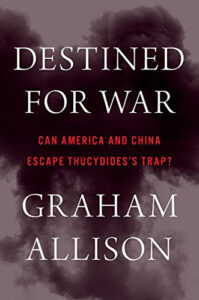 Destined for War: Can America and China Escape the Thucydides’s Trap? by Graham Allison

Huawei were banned by the UK Government this week from the 5G network as a consequence of American sanctions and trade war with China. This is part of a much bigger global political manoeuvring between the up and coming power of China and the incumbent American superpower. Graham Allison, a Harvard Professor of International Affairs, delves into history to understand how threats created by a rising power can be dealt with by the dominant nation in a way that avoids war.

The starting point is the historical story told by the Greek historian Thucydides of the rise of Athens and the fear instilled in the then dominate Sparta that made war inevitable in the fifth century BC. When a rising power threatens to displace a ruling power, the resulting stress makes a clash the rule. China’s recent rise has been very fast; analysts suggest that they are the ‘biggest player in the history of the world’. The China Development Bank provides more money for international projects than the World Bank. China is spending $1.4 trillion to link the infrastructure in 65 countries across Asia, Europe and North Africa through their ‘One Belt, One Road’ strategy. Their network and influence is spreading around the world. Even though America did the same during their rise, having a new and bigger player is seen as a threat.

Allison has identified 16 cases in the last 500 years in which the ascending power challenged an established power. 12 of these rivalries resulted in war. A sketch of each case is given and provides interesting reading before moving on to ‘imagine China were like us’. This chapter reminds us of how America acted over a century ago under President Roosevelt who was the first president to ‘deliberately project American power on the global stage’.

Whilst President Trump’s election success was built on the slogan ‘Make America Great Again’, the ambition of President Xi Jinping, according to Allison, is to ‘Make China Great Again’. Massive infrastructure investment within the country now includes major construction on low lying islands in the South China Sea to allow the installation of surveillance assets. This is adding to the concerns of America. China’s military is preparing to ‘fight to win’ but this does not mean they want to fight.

Moving from a trade war to actual war is possible. The Kaiser did not seek war with Britain, but events and military machines took over. Misunderstandings, mistakes and miscalculations can escalate events into conflict. Allison is keen to argue that war is not inevitable if we learn from ‘four of the cases in which rising and ruling powers successfully steered their ships of state through treacherous shoals, without war.’ These include when the United States deposed the UK as the leading global power and more recently the ascending Soviet Union threatened America’s position as the unipolar power. From these case studies Allison derives 12 ‘clues for Peace’ and an agenda for moving forward. He argues that America needs a ‘serious pause for reflection’ to review the strategic opportunities.

Concluding, Allison suggests that the USA needs to think and work hard on four ideas: clarifying vital interests; understanding what China is trying to do; do strategy and take it seriously, as the absence of coherence is the route to failure; and make domestic challenges central. His message is for both presidents to put their own governance structures on a firmer footing.

Hostility towards China is on the rise, yet it is one of the UK’s largest trading partners. Understanding that hostility in the wider context of global history is a strength of this book. Learning from how other power conflicts either ended in war or peace is an excellent piece of scholarship. I hope that all the Cabinet and Conservative MPs on the newly formed China Research Group in parliament read this book and speak to their American colleagues.