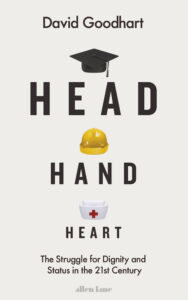 David Goodhart
Head, Hand, Heart: The Struggle for Dignity and Status in the 21st Century

Those with cognitive ability have increasingly been given a higher status than those who work with their hands or in caring roles where emotional engagement and compassion is needed. Covid-19 has brought to our attention the importance of key workers in many fields where their hands and hearts have been necessary for the common good. Why have they been so undervalued? Why have we overvalued the intellectual pursuit of knowledge?

David Goodhart, a journalist turned political analyst and author, whose previous book The Road to Somewhere was a best seller – it sought to understand the post Brexit election cultural divide in the country. His latest writing looks at the UK and USA in particular. He tracks the cognitive takeover with the rapid rise in further education and professions now requiring graduate entry. He argues that valuing skilled work should be inclusive to those who use their hands in manual and craft jobs and those involved in caring and emotional work.

The book is divided into four parts; most is devoted to the rise and potential fall of the cognitive class. He seeks to describe the problem of the cognitive class and how intelligence is only one aspect that should be valued.  He draws out the flaws in measuring intelligence and the meritocracy based on only one form of ability. There are many jobs that need a combination of head, hand and heart, such as surgeons or musicians, so the analysis is over-simplified to make the point. His main concern is the massive increase in higher education offering degrees of little long-term benefit to individuals or society.

The thesis behind this book is simple but it feels rather padded out to fill the book. My main criticism is that it only has 22 pages out of 280 examining why jobs of the hand have become devalued. Jobs that engage the emotions fair slightly better with 30 pages. The book concludes by arguing that the value of knowledge worker is in decline; evidence of many graduates in non-graduate jobs. He finishes with an agenda for achieving a better balance between head, hand and heart. Undoubtedly the Covid pandemic will accelerate the valuing of people who use not just their intelligence but emotional and hand skills.

There is a deeper thesis in this analysis, which is worth paying attention to – that is the cognitive class has reinforced its position creating the imbalance which is generating a number of long term consequences. Such consequences are not ideal for a healthy society where the common good is cherished.