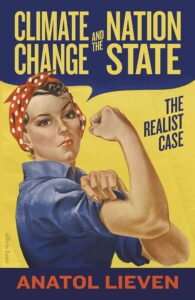 Frustrated by the lack of international progress on tackling climate change, the journalist turned academic Anatol Lieven, seeks to find a way forward through a moderate and security based form of national self-interest. As someone who spent his time studying the security implications for America of China’s action in the South China Sea, he argues that states are seriously miscalculating the risks they face. Building on remote islands in the sea will cease to be a threat as global warming will create rising sea levels. The biggest existential threat facing all nations is climate change and not aggressive military action by hostile nations.

The security agenda of nation states has been focused on ‘traditional challenges’ by ‘residual elites’ whose mental models are outdated. For example, in the UK the defence budget dwarfs spending on alternative energy. The impact of rising temperatures will be huge for many countries, yet policy makers appear not to have made the mind shift. Part of the implication will be rising numbers of migrants forced to leave countries where drought or flooding impact on their ability to live. Lieven argues that there is a perfect storm emerging for western democracies in the combination of high migration and automation of jobs.

Having analysed the problem across the globe the book takes a diversion into the history of nationalism. The author seeks to rehabilitate the idea of nationalism. He is critical of those on the right who seek to draw up the draw bridge and pretend we can maintain the status quo. Equally he is against the left wing cosmopolitan idea of no borders. He argues for a sense of common national loyalty and identity.

Part of the threat posed to the planet is ‘uncontrolled capitalism’. Yet Lieven argues that it is only through capitalism that solutions can be found, but it needs western democracies to develop cross party consensuses on climate change to achieve long-term change. China, taking a nationalist approach, recognises the situation and is investing heavily in alternative energy. Lieven is critical of some Republicans attitudes and lack of global leadership from America. The chapter on the Green New Deal presented to the House of Representatives is very American focused and too detailed.

This book seeks to reframe the need for action against climate change from an internationalist to nationalist perspective – the defence of nation states and their survival. Lieven has a point, but he does not give sufficient weight to the need also for collective action. Although well researched and referenced, my criticisms of this book are many. Some of the arguments are not well structured or concluded, he paints on a very wide canvas of states around the world, which loses the focus of his message. Lieven is right though – we do need a nation-state endeavour from every state in the world to create a sustainable future.

Destined for War: Can America and China Escape the Thucydides’s Trap? by Graham Allison  Huawei were banned by the UK Government this week from the 5G network as a consequence of American sanctions and trade war with China. This is part of a much...

Review: ‘A book that changes the way you see the world’

Review: ‘A book that changes the way you see the world’

Caroline Criado Perez Invisible Women: exposing data bias in a world designed for men Vintage, 2020 Florence Nightingale featured on the Bank of England £10 note for many years until 1992. She is one of only three women to feature on bank notes. When...

Review: ‘A book that changes the way you see the world’
In this section
Share