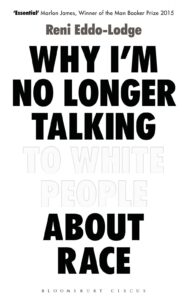 Structural racism is a fact of British life. In 2014 Reni, an award winning journalist, wrote a blog stating that she was no longer going to talk to white people about race – ‘not all white people, just the vast majority who refuse to accept the legitimacy of structural racism and its symptoms’.

The issues raised in her blog have been debated and now expanded into this book. It is challenging and passionate. She relates her own awaking to black British history during a university module that considered colonial history and slave trading. Racism is not just about discrimination – it is combined with power. The power to negatively affect other people’s life chances. Sadly, there are plenty of stories where ‘people of colour’ (her preferred term to define those who are not white) have suffered through the combination of prejudice and power. The chapter on histories is sobering reading. It includes an official report from 1927 into ‘half-cast children’ being examined and facial features used to categorise them, race riots in Notting Hill, London being reassigned by police as the work of hooligans, in the 1960s the Bristol Omnibus and Transport Union preventing people of colour from becoming bus drivers and the recent treatment of the Windrush generation.

The systemic issues in chapter two point to the ‘covert nature of structural racism’. You can spot overt racism at an English Defence League gathering. What you can’t spot are the thousands of individual biases joining together to create a ‘impenetrably white workplace culture’. There is plenty of evidence that life chances are obstructed or slowed down if you are born black in the UK. Reni is against the idea of ‘colour blindness’ and challenges the meritocracy debate when quotas or positive discrimination initiatives are suggested.

Aged four Reni asked her mum when she would turn white – ‘because all the good people on TV were white’. She defines white privilege as ‘an absence of the negative consequences of racism’ – or put another way ‘dull, grinding complacency.’ The systemic failures in the Stephen Lawrence murder case illustrate a number of points to argue that racism does not go both ways due to the issues of structural power. Part of the scare tactics used in racist dialogue is to play on the fear of what Reni call the ‘black planet’. From Enoch Powell to Nick Griffin of the British National Party, who she interviewed for the book, the evidence is clear – that false truths are promoted to stoke division. People of colour seek a redistribution not the inversion of power, as Griffin and others suggest.

The chapter on feminism is a passionate defence of ‘intersectionality’, which is ‘about the crossover of two distinct discriminations – racism and sexism – that happens to people who are both black and women. Feminists who don’t take account of race are certainly challenged. Also challenged is the idea that there is a separate ‘white working class’, which she sees as right-wing rhetoric. Class and race are inextricably connected, she argues and is against any tactics of divide and rule by policy makers.

This is not an easy book to read as a white male. It challenges and provokes. I’m brought up short and support Reni’s conclusion that we ‘need to see racism as structural in order to see its insidiousness.’