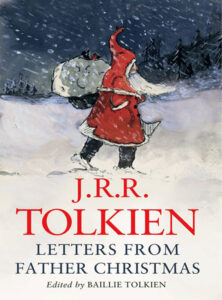 Each December from 1920 until 1943 an envelope arrived at the Tolkien house, bearing a stamp from the North Pole. Inside was a letter often illustrated with amazing colour drawings. Tolkien, the great story-teller for children including ‘The Hobbit’ and ‘The Lord of the Rings’, disguised his hand-writing as he wrote and illustrated stories from Father Christmas to his four children.

This book is a collection of the original letters with the strange spidery handwriting and the varied drawings. Some years they were short notes saying he was too busy to write a full letter and others are long and detailed. There is a real sense of fun as the cast of characters expand. The Polar Bear, known as PB, was Father Christmas’ chief assistant although at times he appears to cause plenty of trouble. On one occasion in 1925 the PB climbed a pole, which broke, and he fell through the roof of the house causing Father Christmas to have to have a change of address. This story comes with the wonderful colour drawing of the incident. PB sometimes adds bits to the letters – although his spelling is not always good.

The reindeer broke loose in 1926 tossing presents everywhere, PB’s nephews come to stay, and one year PB gets stuck in a cave and is missing for weeks. Red Elves appear as helpers, but Father Christmas complains that they turn everything into a game, even digging the snow, and play with the toys they are supposed to be packing.

The letters in the late 1930s onwards are addressed to Priscilla the youngest in the family. The war is mentioned, which Father Christmas complains, reduces the stock of presents and makes for a difficult time. He says ‘goodbye’ in 1943 and looks forward to when Priscilla and her brothers have their own families.

A delight to read and admire the original envelopes, letters and drawings. A wonderful glimpse into the family life and creative mind of J.R.R. Tolkien. It may even inspire me to write letters to our grandchildren.