Twilight of Democracy: The Failure of Politics and the Parting of Friends 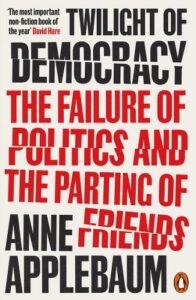 Friendships torn apart. Ideals betrayed. Alliances broken. Why did some of those who fought so hard to defeat communism succumb to the autocratic and populist agendas that endanger democracy? Is it a political generation gone bad?

Anne Applebaum, a historian of communism and commentator on contemporary politics tells a very personal story of friends who now support cascades of falsehood and vent their anger by curbing the institutions of democracy. The story starts at a party at the end of 1999 at her home in Poland where a wide array of friends have gathered to celebrate the new millennium. Applebaum is an American, married to a Polish politician, who has worked at the Spectator Magazine in London and is now a staff writer for The Atlantic in America.

Poland has moved from a liberal democracy to a right wing Law and Justice party with increasingly strong authoritarian leanings. Applebaum seeks to understand why some of those well educated people with whom she celebrated the new millennium have transformed into supporters of authoritarian politics. Her point is that there is no single explanation but rather a theme. ‘Given the right conditions, any society can turn against democracy.’

The illiberal one-party state is a means to hold on to power. The number of countries run by such an elite, determined to stay in power, is increasing. In Europe there are a number of would-be illiberal parties, some of whom are part of the ruling coalition, as in Italy and Austria. Currently only two have a monopoly of power: Law and Justice in Poland and Viktor Orban’s Fidesz party in Hungary. Often this type of party relies on falsehoods and conspiracy theories, and there are lots of examples in the book to worry you.

Perhaps the most interesting chapter for us in the UK is ‘The Future of Nostalgia’. Applebaum’s husband was at Oxford with Boris Johnson, so we get an insight into the nostalgia for Britain’s imperial past in the parts of the conservative party that influenced Brexit. There is little acknowledgement that the past might have its drawbacks. It is not by accident that restorative nostalgia often goes hand in hand with conspiracy theories and medium-sized lies. Falsehoods about Turkey joining the EU, large amounts of money to be diverted into the NHS, and taking back control of our fishing were all deemed acceptable in the desire to reach back to a nostalgic idea of global Britain. Democratic institutions, like our independent judiciary, came under attack and were labelled the ‘enemies of the people’ in the press when they ruled that the British Parliament would have to give its consent before the government could withdraw from the EU.

Applebaum tells the stories of individuals from the New Year party and others who have, in her view, transitioned towards far right illiberal views. Often this seems born out of frustration and anger, their sense of identity bound up with nationalism. There are, she says, a growing body of intellectuals and ideologies, long divided by borders and history, who have found a set of issues to unite around. Opposition to immigration, real or imagined, especially Muslim immigration. Another is the promotion of a socially conservative, religious world view. Sometimes opposition to the EU, or to international institutions more generally.

Recent events in the USA are an example of all three issues. Cynicism about the basic institutions is more dangerous to democracy than the threat from the Soviet Union, she argues in a impassioned chapter on the politics of America. Written before the storming of the US Capitol, which exemplifies her argument, she wonders how the idealism of the Republican Party has become a rhetoric of despair.

Politics is a constantly evolving process without a final solution. There have been ebbs and flows throughout history, and democracy can never be taken for granted. As Applebaum concludes ‘[t]here is no road map to a better society…all we can do is choose our allies and friends…with great care.’ ‘Because all authoritarianism divides, polarises, and separates people into warring camps, the fight against them requires new coalitions.’

Anne Applebaum is well connected to the intelligent classes at the heart of right of centre politics. Her book is a ring-side insight into the ideological battles that are ongoing, set within a wider frame of the growing threat of illiberalism and the desire to gain and hold power at the cost of truth and freedom.