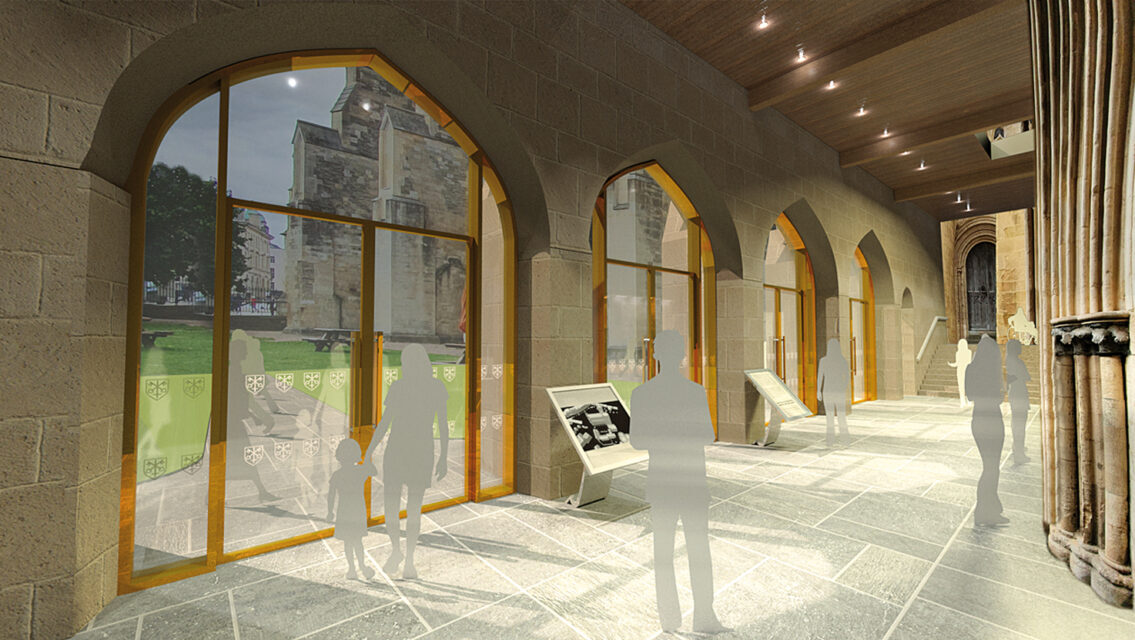 By The Revd Canon James Mustard

The archaeological work on Exeter Cathedral’s cloister is opening a window onto the cathedral’s past. We are learning that it was a very substantial and prestigious structure indeed, with buttressed piers on a similar scale to those along the south wall of the nave, supporting a stone vault and with at least one newly-discovered, high-status grave in front of the Chapter House.

Cloisters tend to be associated with monasteries, places where monks would work as scribes, copying and illuminating books, connecting churches with dormitories with refectories, the link between work and prayer. However, at Exeter the cloister had a very different role. Exeter, like its neighbouring cathedrals of Wells and Salisbury, was never a monastery. The community of priests and lay people who staffed the cathedral before the Reformation (canons, minor canons, priest vicars, lay vicars, choristers and sacristans, some eighty in total), lived in their own properties around the cathedral, not communally. The cloister in these cathedrals, didn’t really lead anywhere or connect anything: it was a destination in itself.

Cloisters in this tradition were used for elaborate processions. Following the example of Salisbury, the biggest procession of the year in Exeter was Palm Sunday. One procession would go through the City – led by the City’s guilds – representing the crowds coming to greet Jesus. The cathedral’s clergy and choir would process through the cathedral and around the cloister to greet them at the West Front, with choristers singing from the West Front Gallery. A week later, the cloister would be used in the procession to the font on Easer Day. When elaborate processions ended at the Reformation, it is easy to understand why Exeter’s cloister was progressively demolished: space at Exeter has always been at a premium! The Dean and Chapter recycled cloister materials to construct a choir rehearsal room in front of the chapter house, c 1640. The demolition was continued and completed during the Commonwealth.

So, our present aspirations for the cloisters mark something of a first for Exeter. We want our cloister to be a definite link between our ministries of worship (in the Cathedral), community and meeting (the Chapter House) and Refreshment (the Café), having something of a monastic quality. At the same time, it will – like its predecessor – be a destination in itself, as a gallery and exhibition space, and a processional space. Good architecture always tells you something about what goes on inside. This cloister gallery will be a physical expression of our ministries of worship and welcome, showing that the two are inextricably linked.