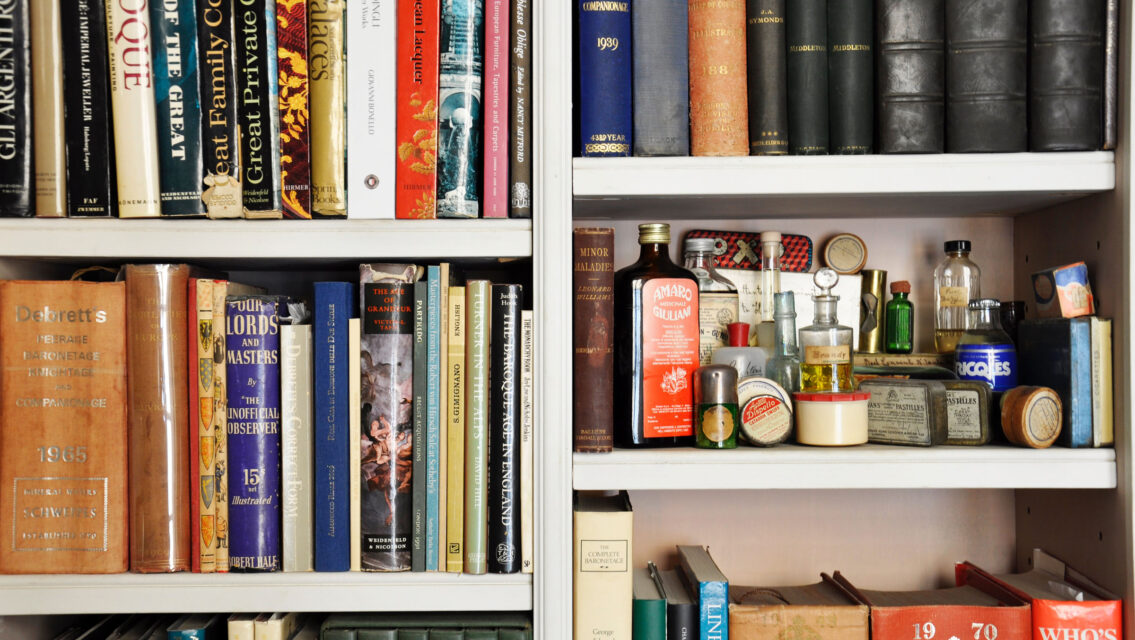 This is one of the more trivial questions that has been absorbing people over the past few weeks. Even those of us who are not video-conferencing may have seen politicians and experts on the TV being interviewed from their own home. The glossy but bland TV studio backgrounds have been replaced by home furnishings. A particularly popular choice is the tightly-filled bookshelf.

Now, rows of books have several advantages: the nation cannot gaze at your lovingly-curated collection of family photos or golfing trophies. Your soft-furnishing choices are hidden from scrutiny. Books are seemingly less emotionally-freighted. Instead, full bookshelves give visual backing to experts’ words: “You really should believe what I’m saying—just look at all the books behind me!”

TV interviewees are playing on the fact that we are quick to judge someone by their context—especially by their home, for we assume that this is something that the person on screen will have chosen themselves. From classical antiquity and beyond a favourite way of praising someone was to praise their house. A beautiful, luxurious and well-ordered villa was taken to illustrate the exquisite refinement, wealth and rationality of its owner. In recent weeks, even though other personal effects are out of view, bookshelves have been subject to the same scrutiny. While the well-ordered villa said something about the taste and wealth of its owner, the choice and ordering of books on a shelf is supposed to reveal the qualities of their owner’s mind. Of course, not all of us are interested in what someone else has on their shelves. But for those of us who are, the opportunities for impromptu analysis (and sniping) are endless.

But there are some surprises. Chaotic bookshelves might be thought to be bad; but there is a long tradition of brilliant academics whose university studies seem hardly to be ordered at all. I think with fondness of my tutors’ rooms full of teetering piles of books, though which I had to carefully pick my way, all the time anxiously pondering where I was going to sit. So, an eminent historian can probably get away with appearing on TV framed with bookshelves in a state of wild abandon. I suspect that this look might not suit a junior member of cabinet so well.

On the opposite end of the scale, bookshelves which appear too ordered raise awkward questions: have their owners been spending a lot of time tidying up before their TV interview? (Spring-cleaning might be what some of us have been doing in lock-down—but do we want members of the government’s scientific advisory body to have spent valuable time doing this?) Still more worryingly: have they in fact read any of those books at all?

A good rule of thumb emerges: display shelves tidy enough to give a sense of order, but not so tidy that the books look as if they are merely items of interior decoration (something unfortunately suggested by a well-known author’s decision to order her books by colour).

But I still wonder: how do you order your books? The obvious answer might be alphabetically by author’s surname. But it doesn’t seem quite right to put the Good Beer Guide next to the Brothers Karamazov (especially if this reveals the embarrassing truth that one is more well-used than the other). It’s inconvenient to have cookery books in the pile kept by the bed for sleepless nights. (Although, now I think of it, there is something very soothing about the Larousse Gastronomique’s recipes: ‘First, pluck your woodcock…’)

Most people with more than a few books arrange them to some extent by subject. And librarians have devised cataloguing systems for this purpose. My mother, who trained as a librarian, had vivid memories of learning the Dewey Decimal System. I am deeply grateful to anyone who has catalogued, shelved and reshelved the books I need to use!

Not all cataloguing systems are completely straightforward, however. When I was about 10 I was given the responsibility of sorting out the class library. This ‘class library’ was a small shelf of about 30 books and I set about my task with enthusiasm. Half-an-hour later, expecting praise for my tidy shelves, I was mortified by my teacher’s mirth—for I had ordered the bookshelves not by author or even by topic, but by size. This was not how proper libraries worked, I was told. I remembered this exchange with amusement when, a decade later, I found myself looking for a book in the Bodleian Library. Unfortunately, I needed to re-use a book which I had sent back to the underground stacks the day before. It was probably still in the holding room, the librarian explained, waiting to make the journey down several flights of stairs to its underground home. So, if I could tell her what the book looked like, then perhaps she might be able to find it. The fact that it was by Luther meant nothing. Large and blue were the best identifiers. And in this case, size really did matter, because (oh, secret joy!) I discovered that the Bodleian shelves its books by subject, and author and by size. For with a large collection, this is the most efficient way of using space.

This week I discovered an even better way of arranging books. One of my students told me that a Scandinavian bookshop asked its junior customers how they wished their shelves to be arranged. The system they came up with makes glorious sense and is a humorous challenge to an adult perspective. The children decided they wanted their books arranged in the way that they viewed their world: so, books about fish and whales were at the bottom; books about outer space were at the top; and the rest were carefully-ordered in between.

I will continue to stare at the bookshelves behind the heads of people on TV or my computer-screen. But not because I am judging them for their order or lack of it (I am hardly in a position to preach on that subject). Bookshelves are not a window into someone’s soul; rather they are a vivid reminder of the richness and variety of the world from which most of us are currently isolated. Indeed, like C. S. Lewis’ wardrobe, a wall of books is not a barrier but a gateway to something much bigger.