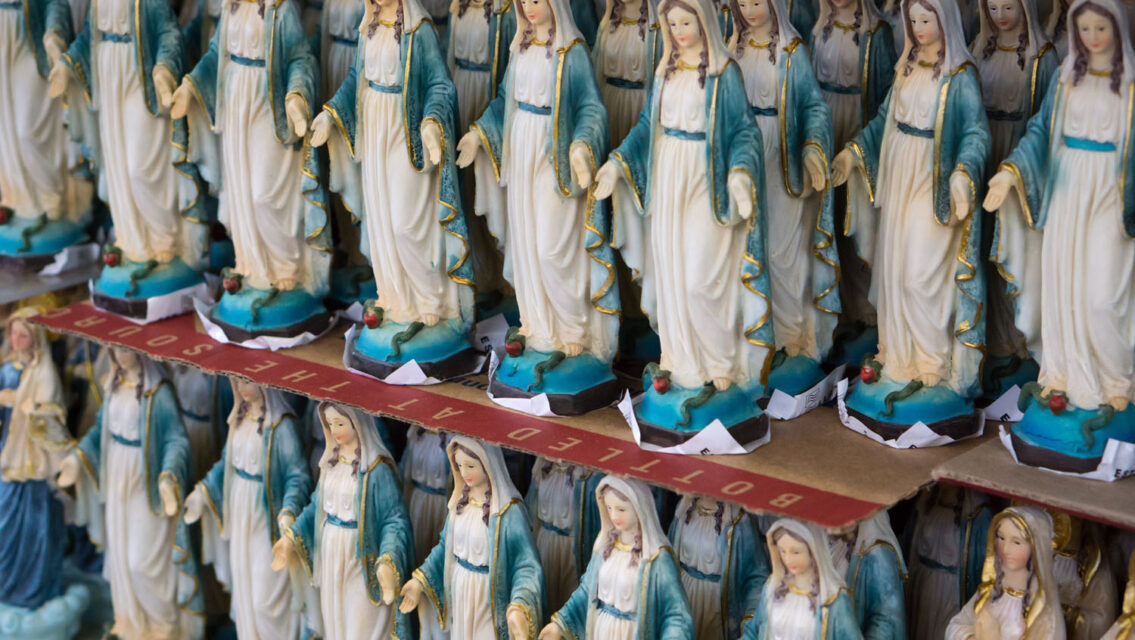 By The Revd Preb Julian Ould,

A retired priest, who lived in my last parish, left me in his will a wooden statue, which is about 18 inches high, of the Madonna and child. The statue has a history in that this priest had rescued it from a convent many years before, having found it placed in an out of the way corner with it’s face to the wall. It faced the wall because it is not the most attractive figure in the world and yet the nuns could not bring themselves to throw it away. The priest asked if he might have it and they readily agreed and consequently it had been placed somewhere on full display in his home until the day he died, when it then came to me with strict instruction that I was to have it on display for all to see. Needless to say, the priest’s immediate family were delighted by this arrangement and readily handed it over. It would seem none of them liked the statue and yet like the nuns felt it couldn’t be thrown away, so giving it to me was a relief.

Once in possession of the figure, I followed the instructions to the letter, having had a great admiration for this priest and wanting to fulfil his wishes. I put the statue on display in my study and it has been with me ever since. In fact, I treasure the statue, partly because of its history, partly because of the priest who rescued it, but primarily because it acts as a reminder to me, for it is clearly carved with care and was intended as a devotional aid regardless of what it looks like. But a reminder of what?

Well, one of the greatest follies of mankind, is to judge by appearances.

We all do it – we are always more ready to respond to someone who looks nice, and yet from this have no real indications of what a person is like at all. There is an important saying: ‘never judge a book by it’s cover’ and yet quite literally we do and hence why publishers spend millions on producing tempting, even provocative covers.

There is a wonderful story in a book called The World of Don Camillo which I believe well illustrates this fact. The book contains a series of light hearted and sometimes comical stories of village life in a small Italian community with a very forthright Roman Catholic Priest and supporter of the Democrats and an equally forthright Mayor and Chairman of the Peoples Front movement for the Communists. This particular story was of a statue known as the ugly Madonna. The statue was six feet tall, made of terracotta and painted in bright colours. As the statue was over three hundred years old the villagers would not allow their priest, Don Camillo, to remove it. During the war, in his heart of hearts, he hoped the foreign troops would destroy it or steal it, but it remained in its niche in church, its very ugliness protecting it.

One feast day, following the war, the villagers decided to parade the statue through the streets on a small truck. The village was all decked out and along the main street every house was covered with streamers. Unfortunately, the road was made of cobbles and the pedestal on which the statue was tied down began to bounce about. Then, on a particularly rough part of the road the statue began to crumble and disintegrate to nothing before their eyes.

The villagers gasped with amazement. For on the pedestal, there emerged, like a butterfly coming out of its cocoon, a much smaller but very beautiful statue of solid silver. Then everyone realised that all along the ugly Madonna had been protecting a thing of exquisite beauty inside itself.

In gratitude Don Camillo and the villagers decided to put the ugly statue back together again, piece by piece, and that both would stand side by side in the Church.

Appearances are in actual fact very deceptive. Real worth comes from within, by the way we respond to one another and therefore we should be careful not to prejudge.

My ugly Madonna doesn’t house a beautiful silver one, but has a history in that it has stood as a cared for figure that no-one felt able to throw away. They couldn’t throw it away because of what it was, the significance of which was not that Mary the mother of our Lord was a great beauty, which we have no knowledge of, but that she in saying yes to God’s will allowed him to come close to us and in this has a beauty beyond compare.