Upon an Easter Morning 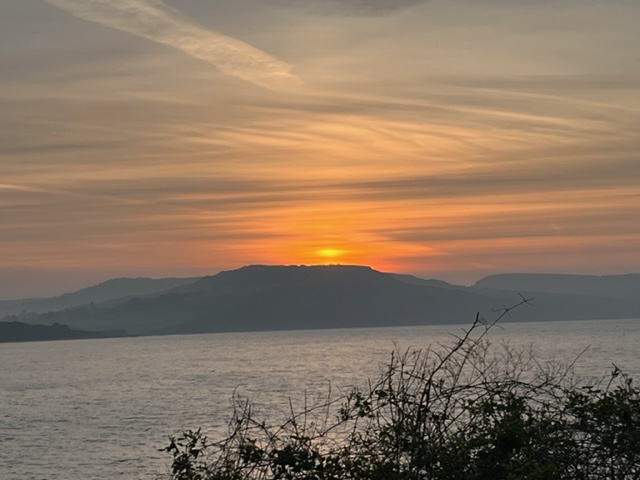 Alleluia Christ is risen; he is risen indeed, this glorious refrain is sung and rings in our heads on Easter Day and throughout the Easter season. Another line rang in my head as I took this photo early on Easter Day. The lines that rang in the depths of my mind are from a poem I had to learn as a child;

“Upon an Easter Morning, so early in the day, the organ in the chancel sang both grand and gay,”

These 4 lines have been an “earworm” to me for many years. I had to learn the whole verse for an elocution competition at the age of ten. I remember I just scraped through with a commendation!

After that, I don’t think I paid any attention to the poem or really understood where the verse had come from. However, over the years and particularly at this time, just the first 4 lines have come back and repeated themselves in my mind. Where did they come from, what was the poem, and who wrote it? Well with the joys of Google, I was able to locate the poem and its author. The poem is entitled, Upon an Easter Morning and was created by Eleanor Farjeon. Eleanor was born in London in 1881, educated privately, she wrote children’s stories and fantasy stories, and became popular with both children and adults. She died in 1965 several years after my elocution competition; her popularity at that time was perhaps why her work was chosen for that particular competition. After her death, the Farjeon Award was instituted in 1966 and is awarded for outstanding work in children’s literature.

We too upon Easter morning sing God’s praises and celebrate Christ’s resurrection with music and song as mentioned in the poem. The verse I had to learn, I found out, was the second verse but it is the final verse, which has now has caught my attention. “The light went like a ladder, from valley-bed to sky”

Many of us have watched the sunrise on Easter morning and as the sun has risen we have once again celebrated the Son of Man rising from the tomb bringing again light into our world. Another lines has also resonated with me; “the wind went like a spirit to blow the dust away”.

This line takes me back to that first Easter morning, the tomb stone was rolled away and light was let out, blew away the dust of the old life, and cleared the way for the New Life of the risen Christ. For that, I reply Alleluia Christ is risen, He is risen indeed. Alleluia, Alleluia.

Upon an Easter Morning by Eleanor Farjeon

Upon an Easter Morning,
So early in the day,
The bird raised up his whistle
To tune the night away,
The field raised up its grass-blade
Of emerald anew,
The garden raised its flower,
The river raised its dew.

Upon an Easter Morning,
So early in the day,
The organ in the chancel
Sang both grand and gay,
The people on the causey,
The cattle in the pen,
Heard the pipes of heaven
Rising up again.

The light went like a ladder
From valley-bed to sky,
The lark went like a seraph
Beyond the mortal eye.
The wind went like a spirit
To blow the dust away,
Upon an Easter Morning
So early in the day.