“One William Strickland is widely credited with being the first person to bring turkeys to Britain from North America, supposedly importing six of them acquired from American Indian traders in 1526. He made a fortune and name for himself as a turkey trader and his family coat of arms, issued in 1550, features one of the birds. Henry VIII was the first English monarch to eat turkey, but it remained a luxury foodstuff in England until the 1950’s, since when it has become a staple of many households’ Christmas dinners” 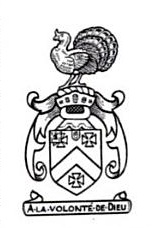 The text above is one of the earliest printed descriptions of a turkey, published in 1554. It is from the third volume of the Swiss naturalist Conrad Gesner’s Historium animalium. This encyclopaedia of animals was published in five volumes between 1551 and 1587, and is one the very first works of modern zoology, combining information from Biblical, Classical and Medieval sources, as well as contemporary observations by Gesner and his colleagues.

Here the turkey appears under its Latin name ‘Gallopavo’, with its English name given as ‘a kok of Inde’. Today the turkey’s scientific name is Meleagris gallopava, from the Latin gallus (cock), and pavo (chicken-like); Meleagris is the Roman name for the guineafowl.