From the Library: Taking in the View 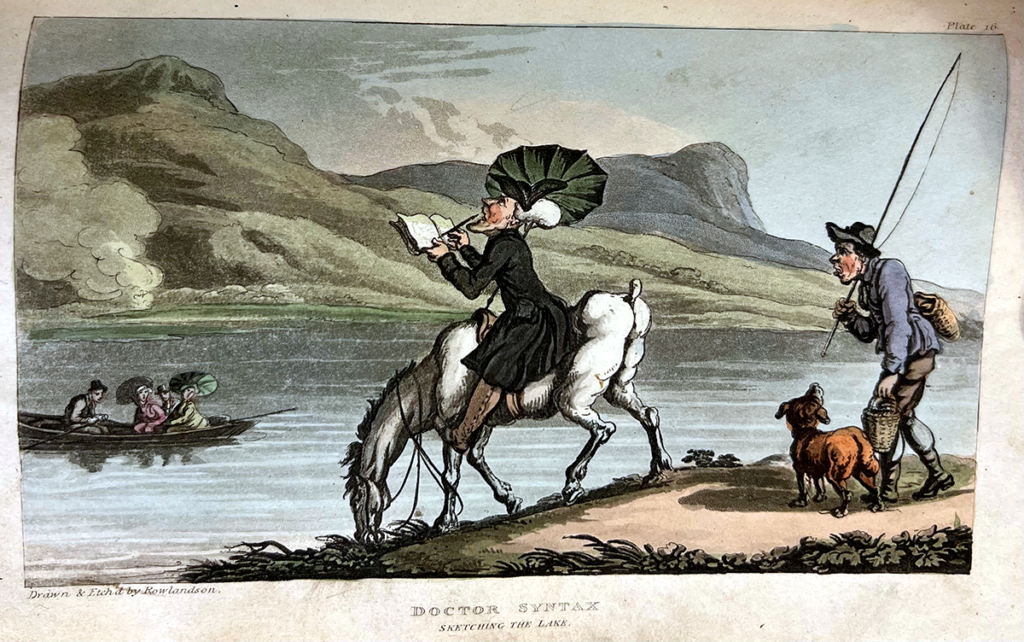 While visiting the Lakes last month I cycled along the western shore of Windermere to the Claife Viewing Station, a monument built in the 1790s to offer visitors a view across the lake. The narrow path still winds upwards through dense woodlands and emerges above the trees to reveal a spectacular landscape with Belle Isle in the foreground and the eastern shore of the lake stretching for miles to the left and right.

Now managed by the National Trust, this viewpoint tells the story of the late 18th and early 19th century’s obsession with the picturesque – an aesthetic ideal, promoted by the travel writer William Gilpin (1724-1804), which attempted to define the “kind of beauty which is agreeable in a picture”.  In the picturesque, the formality, order and restraint of Neoclassicism gave way to exciting new ideas about what is sublime and beautiful: ruggedness, variety and irregularity.

Staycations were all the rage at the turn of the 19th century. The French Revolution and Napoleonic Wars impeded access to the Continent and the wealthy (and middle classes) opted for a Grand Tour of the British Isles instead. North Wales, the Scottish Highlands and the Lake District, which had previously been considered rather wild and uninviting, became fashionable tourist destinations. There were new guidebooks, such as Thomas West’s guide to the Lakes (1778), which offered advice to travellers on how to experience natural landscapes to their best advantage.

Viewing stations were a key part of the infrastructure of this new picturesque tourism. At Claife Viewing Station, the windows contained tinted glass so visitors could ‘experience’ the landscape at different seasons: yellow for summer, orange for autumn, green for spring, blue for moonlight and lilac for a thunderstorm. (The National Trust still provides visitors with coloured glass today to recreate the 18th century visitor experience.) Tourists also used the popular Claude Glass, a portable tinted convex mirror which filtered and framed the landscape to make it appear more like a painting.

The picturesque, however, had many critics. The writer William Combe (1742-1823) was among those who saw a paradox in seeking out the most sublime natural scenery only to then view it through an artificial lens so it conformed to certain aesthetic rules and standards. In 1812, Combe published a satirical poem, The Tour of Dr Syntax in Search of the Picturesque, illustrated by the great caricaturist, Thomas Rowlandson (1757-1827), in which a rural schoolteacher travels round the country sketching ‘improved’ versions of the scenery. For example, he comes across a sign-post – a “mangled” and “uninforming piece of wood” – which, though it appears “rude and rough, without a glass” (i.e. a Claude Glass) yet, has “something picturesque about it.” He proceeds to edit details in the landscape around the signpost so the composition conforms to picturesque ideals; he relocates a distant cluster of cows nearer the post, turns the nearby pond into a stream and adds a bridge and a few rugged hills. He defends his decision to falsify details within the natural landscape:

“What man of taste my right will doubt,

To put things in, or leave them out?

‘Tis more than right, it is a duty,

If we consider landscape beauty :-

He ne’er will, as an artist shine,

Who copies nature line by line;

Whoe’er from Nature takes a view,

Must copy and improve it too:

To heighten ev’ry work of art,

Fancy should take an active part:

Thus I (which few I think can boast)

In this image, Dr Syntax’s attempt to capture the picturesque scenery at Windermere is about to be thwarted by his horse, Grizzle, which has leaned forward to chew on a tuft of grass and will subsequently throw its master into the lake.